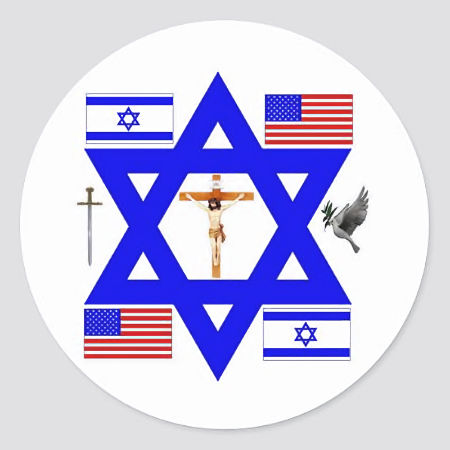 Today, when first meeting someone, many times I am asked if I am a Christian. My usual answer is just, “Yes!” But, if I’m asked of which denomination I associate, I generally say, “None at the moment, but I am a Judeo-Christian.” Some may find that an odd way of explanation, but here in the United States most people understand. Why? Well, we’ll get to that in a moment.

According to the dictionary, Judeo-Christian means having historical roots in both Judaism and Christianity,1 but many non-Christians believe this phrase is just “one of 20th century America’s greatest political inventions.”2 They believe it was a marketing ploy for combating communism, but the term was used long before that political ideology was a problem in the United States. Others argue that it was first used during the rise of Nazism, and some suggest the term dates back to the 19th century when it was used during Civil War times. But the term really isn’t political and goes back much further than that.

Author and talk show host, Dennis Prager, best explains why United States citizens understand the Judeo-Christian culture. He said, “The United States of America is the only country in history to have defined itself as Judeo-Christian. While the Western world has consisted of many Christian countries and consists today of many secular countries, only America has called itself Judeo-Christian. America is also unique in that it has always combined secular government with a society based on religious values.”3 At least that is how the country started, but times are now a-changing.

My thoughts are similar to those who were founders of this country, I believe we are heirs of the Old Testament as well as of the New Testament. If you have followed my articles for any length of time, you have probably already noticed that a large percentage of topics are about, or include, the Old Testament of our Christian Bible. I feel you can’t explain God’s plan properly without understanding the previous history of his people. His plan has been unfolding since humankind’s fall in the Garden of Eden.

There are occasions when a new person becomes a bit confused and asks if being Judeo-Christian is similar to Messianic Judaism. The short and compact answer is, no! A Christian who accepts and believes that the Old Testament is equally important to study may be considered a Judeo-Christian. But a Jew who accepts Jesus as their savior and henceforth acknowledges the New Testament as a continuation of their religion is, therefore, a Messianic Jew.

Messianic Judaism is a modern religious movement that combines the Jewish religion with the acceptance of Jesus Christ as the Jewish messiah. As a dictionary explains, messianic means “of or relating to a messiah [savior]” and Judaism refers to “a religion developed from among the ancient Hebrews.”4

Most Messianic Jews believe Jesus is God. They retain many Jewish beliefs and traditions, but with one exception — that salvation comes from the acceptance of Jesus, rather than following the laws and customs of the Hebrew Bible (our Old Testament).5 Generally, Messianic Jews refer to our Lord using the Hebrew, Yeshua, instead of the English, Jesus, and they regularly call God by the name/title Adonai.6 This movement began in the 1960s7 and is growing larger each year. Some say it is still evolving. “Messianic Judaism is the fastest growing stream of religious Jewish life,” says Joel Chernoff of Messianic Jewish Alliance of America.8

Although the Christian community usually accepts Messianic Jews as part of Protestantism,9 the relationship is not all that cordial the other way around — accepting Messianic Jews (Jews, as well as converted Christians) as part of the traditional Jewish fold. As one Rabbi stated, “This is a problem for us. We must be consciously aware of who joins our synagogues and make it clear that this is a home for Jewish people. It needs to be Jewish space.”10 That sounds like an ancient voice echoed from Jewish leaders during the time of Jesus’ human life. Just my thought, okay?

The rebellion is understandable, I guess. After all, the ancient Jewish religion is still waiting for the Messiah to arrive, having rejected Jesus in the past. They don’t want any finger pointing, to bring attention to what they did. There is no intention here, to attach any blemish to the Jewish religion, for the first Christians were all Jews. Let’s not forget, Jesus was a Jew, too. And the whole situation worked out just as it was supposed to. It was all part of God’s plan. The bottom line is, our Christian roots came from the Jewish religion and we are the sand and the stars that God spoke to Abraham about.

Abraham’s promised seed leads to Jesus Christ, but also to a whole world of peoples. Who are the offspring of his seed, today — the promised children? Who makes up the offspring that are as great a number as the sand on the seashore, or the stars of heaven? We are! We are the children.11

What is a Christian today?

Think about it, the most accurate description of a Christian, would be what the Bible says it is. “But,” some say, “didn’t the term Christian come later in Church history?” No, it did not. The term is actually used in the Bible.

“When the Christian movement reached Antioch in Syria, the gospel was preached to Gentiles as well as Jews. Such evangelism marked the sect as more than a new type of Judaism; it was a new religion. The Gentiles in Antioch invented a name for the new group. Since members of the group constantly talked about Christ, they were called Christians.”12

So, it was in Antioch that the new followers of Jesus Christ were first given the name of Christians. In the book of Acts, it says, “Then Barnabas went to Tarsus to look for Saul, and when he had found him, he brought him to Antioch. So it was that for an entire year they met with the church and taught a great many people, and it was in Antioch that the disciples were first called ‘Christians’,” (Acts 11:25-26, NRSV). Also, see: Acts 26:28-29; 1 Peter 4:16-17.

Today, most denominations are far different from the Christians at that time, but I bet Messianic Judaism is much closer to early followers of Christ than any other modern sect. However, it is only natural for a religious sect to evolve than to stay static, so it was normal for those early Christians to delete unnecessary customs and start new ones as they settled into the teachings of Jesus. The real problem with the Christian religion was that it became political and many of its leaders became agents of evil, craving power instead of providing service. And they wanted to remove any semblance of Judaism. Their thought was, save the stories, but remove the culture.

A Lot of Choices

Today, Christian denominations come in many flavors from which we can choose. Everything from Catholicism to Messianic Judaism and everything in between — it seems like the choices are unlimited, and they all have individual twists and quirks. I call myself a Judeo-Christian because I believe it is important — crucial even — that we study the Hebrew Bible as well as that of the newer Christian Scriptures; it all fits together like the pieces of a jigsaw puzzle.

Labeling myself is not of necessity, though. It only lets others know what I believe and, if I’m questioned further, it does give opportunity to make further explanation. But no one needs to label themselves as any particular kind of Christian. To be honest it is very simple to be a Christian and assure your place in the new world that is to come. And you don’t even have to attend a church to receive this gift.

The most dedicated Christian man I ever knew — my mentor — rarely went inside any church. He knew the Bible inside and out, top to bottom, front to back and had more Bible truth in his head (and heart) than I will ever know. His reason for being churchless, he said, was because he tried many denominations in the past but none, not one, followed the real teaching and spirit of Jesus and the apostles. For an article on this topic, see “What Kind of Christian are you?” listed in References & Notes.13

Getting back to my point, it is relatively simple to be a Christian. If you truly try to live your life as a Christian and believe Jesus died for your sins, then, yes, you are a Christian. The Bible says, “For God so loved the world that he gave his only son, that whoever believes in him should not perish but have eternal life,” (John 3:16, ESV).

Our music selection for this article is from a performance at a Messaianic Jewish concert, recorded December 2014 in Jerusalem, Israel. Watch this venue full of Messanianic Jews singing praise to our Lord. The artist is Canadian singer-songwriter Jamie Hilsden. The song is “Let Us Sing to the Lord” which is sung in Hebrew, but it is close-captioned in English. It has a nice up-beat sound. Lyrics are below and the music video is listed in References & Notes.14

Oh, come, let us sing to the Lord!
Let us shout joyfully to the Rock of our salvation
Let us come before His presence with thanksgiving

Oh come, let us sing to the Lord!
Let us shout joyfully to Him with Psalms
Oh, come, let us worship and bow down

1 thought on “Judeo-Christian vs. Messianic Jew”