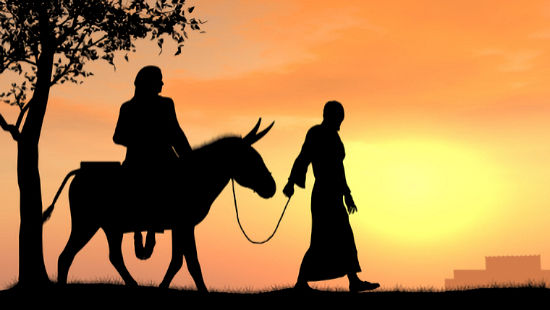 I received an email from one of my daughters the other day. She wrote, “Since riding a donkey when pregnant would have been so hard for Mary, do you think Jesus was born in the other Bethlehem, which is closer to Nazareth?” She was, of course, inquiring about the journey Joseph and Mary made just before Jesus’ birth.

Since she wrote instead of phoning, I figured she was at work and was having a discussion with someone about this biblical subject. Just knowing about a second town of Bethlehem in Israel would be impressive to many people, because that is not a well-known fact. And discussing such subject matter was impressive to me, for it lets me know she reflects upon biblical ideas and thoughts every day, not just once a week at a church service. Anyone who examines a map of Israel in detail may raise the same question as my daughter. Bethlehem of Galilee is in the north country, near Nazareth, while the other, Bethlehem of Judea, is much further south, near Jerusalem.

Here is a short version of the story preceding Jesus’ birth. The Roman emperor issued a decree that a census was to be taken throughout Rome and everyone needed to return to their ancestral town to be registered (Luke 2:1-3). Mary’s fiancé, Joseph, had to travel from Nazareth to Bethlehem. Traveling to Bethlehem of Galilee (in the north) while pregnant and riding on a donkey would seem more logical, since it is a much shorter distance, then traveling the greater distance to Bethlehem of Judea.

Others have also thought of this possibility. 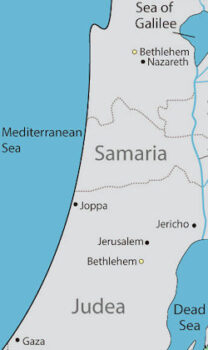 Not long ago, an archeologist, Aviram Oshri, had a similar thought. He was excavating in Bethlehem of Galilee, and said he found evidence, “which he believes show that the traditional account of Jesus’ birthplace may be wrong.” He found a “Byzantine-era church, with a cave hidden under the apse,1 as well as parts of a wall that may have circled the village and another two-story building that could have been an ancient khan or guesthouse. All would be from the period of Jesus’ life.”2

Thinking about the difference in travel time, Oshri stated, “How would a woman who is nine months pregnant travel 175 kilometers [108 miles] on a donkey all the way to Bethlehem of Judea? It makes much more sense that she would have traveled seven kilometers [4.4 miles].”3

Personally, I think he was fudging the distance a bit, for my research indicates the distance between Nazareth and Bethlehem of Judea is really about 113 kilometers (70 miles).4 Besides, Mary and Joseph didn’t voluntarily choose to make this trip, they were commanded to do so, by the government.

Let’s face it, migrations necessary across large areas of land were never easy in the days before modern transportation, and pregnant women weren’t exempt from the hardships. It may not have been easy, but they made the trips anyway.

In the United States, where I live, pioneers settled the west of our country by crossing this vast land in wagons and on horseback, before any automation-like transportation was invented. Many were pregnant women and they went not tens or miles, or even hundreds of miles, but they had to transverse thousands of miles without any roads to travel upon. And they birthed babies along the way, too.

But, inaccurate distance and lack of understanding the necessities of travel long ago, are not the only things I found wrong with Oshri’s theory. Evidently he doesn’t know or understand scripture, because there are biblical reasons that indicate it was Bethlehem of Judea that was the birth site of our Lord. Even an article in The Times of Israel in Jerusalem stated, “when he produced his findings for his employer, the Israel Antiquities Authority, he found his proposal dismissed and called ‘worse than a joke’.”5

The Bible specifically states the city was Bethlehem of Judea. “Joseph also went from the town of Nazareth in Galilee to Judea, to the city of David called Bethlehem, because he was descended from the house and family of David. He went to be registered with Mary, to whom he was engaged and who was expecting a child” (Luke 2:4-5, NRSV).6 And in the Old Testament, there is a prophecy about Jesus being born in Bethlehem of Judea (also known as Bethlehem of Ephrathah).7 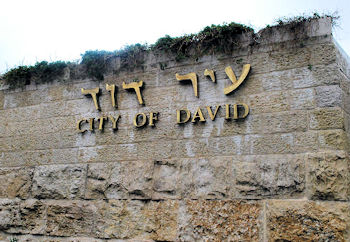 But you, O Bethlehem of Ephrathah,
who are one of the little clans of Judah,
from you shall come forth for me
one who is to rule in Israel,
whose origin is from of old,
from ancient days, (Micah 5:2).

Not only is this city of Bethlehem the birthplace of Jesus Christ, it is also the renowned City of David. “It was here in young David’s hometown that the prophet Samuel anointed him to be king over Israel (1 Samuel 16:1-13).”8 Also, even earlier in biblical history, the first mention of Bethlehem of Ephrathah is in the first book of the Bible, as the burial site of Jacob’s favored wife, Rachel.9 “So Rachel died, and she was buried on the way to Ephrath (that is, Bethlehem),” (Genesis 35:19). It was through this hereditary line that Jesus was born.

This mountainous early Canaanite settlement, some 2600 feet above the Mediterranean Sea, has always been connected with the patriarchs. It is situated along an ancient caravan route and considered a melting pot of peoples and cultures.10

Did Mary ride on a donkey?

Now, what about that comment concerning a pregnant woman riding a donkey? “The Gospels do not specify whether Mary and Joseph walked or used a donkey for transportation.” Actually, there is no biblical account about what mode of transport was used.11

Although there is no mention of Mary using a donkey in the New Testament account, it was a popular way of traveling at that time. However, there were common hazards along major trade routes, so “most modern biblical scholars say that it is more likely that the Holy Family traveled in a caravan of people,”12

One author makes a good case for a caravan. “Mary and Joseph were not the only ones taking the journey. More than likely, the routes between cities were crowded with travelers [because of the census]. Nobody would consider taking a trip like this alone. It would not have been safe, as the territory between towns was not policed and bandits would have been a real concern. The people probably traveled in great caravans for convenience and safety. Mary and Joseph would have been amongst the vast migration of people.” Most caravans would have included individuals walking, as well as using camels, and accompanied by wagons pulled by other animals. 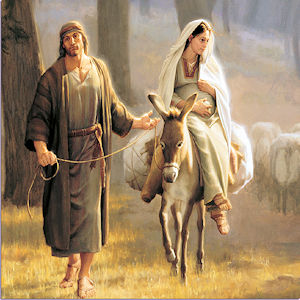 Nevertheless, I should mention this quote from an apocryphal gospel, from the 2nd century AD, that does mention Mary riding a donkey. This document is alleged to have been written by ‘James the Just’, the brother of Jesus. Though widely read, it was never accepted into the New Testament Canon.13 (For a full copy of this document online, see References & Notes at the end of the article.)14

And there was an order from the Emperor Augustus, that all in Bethlehem of Judæa should be enrolled. And Joseph said: “I shall enroll my sons, but what shall I do with this maiden? How shall I enroll her? As my wife? I am ashamed. As my daughter then? But all the sons of Israel know that she is not my daughter.” “The day of the Lord shall itself bring it to pass as the Lord will.” And he saddled the ass, and set her upon it; and his son led it, and Joseph followed, (Protoevangelium of James, chapter 17).

Now the second Bethlehem, Bethlehem of Galilee, about 6.5 miles (10.5 km) northwest of Nazareth, was always a small community known for farming. This town was also known as Bethlehem of Zebulun (Joshua 19:15) and was the burial site of Ibzan15 (Judges 12:10), the tenth judge of ancient Israel.16 Today, the village is populated with less than one thousand people and is basically a moshav, which is a cooperative agriculture social group.17

There are a few other articles about Mary, the mother of Jesus, that you may be interested in reading: (1) “Puzzle Solved: Here is Jesus’ Birth Date, and the Day of Mary’s Conception, too”, (2) “Mary & Joseph — Mother & Foster-Father of Jesus”, and (3) “Jesus’ Mother was a Virgin — What? Is That Even Possible?” These articles are listed in References & Notes.18

There is something going on down in Bethlehem.

We know what happened in Bethlehem of Judea because of written knowledge after the fact, but to the people of the time, it was all a surprise. They didn’t know what to make of it and the truth of the event was slow to spread. This thought is reflected in the song selected to accompany this article.

The song is ‘Down in Bethlehem’, also known as ‘Something is Going on Down in Bethlehem’. This version is presented by Purdue University’s vocal music department,19 which was recorded at the 78th Annual Christmas Show in 2011. Selected lyrics are below and the music video is listed in References & Notes.20 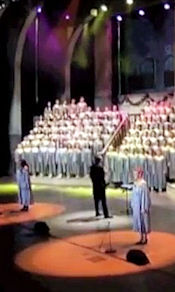 9 thoughts on “There are Two Bethlehems — In Which One was Jesus Born?”