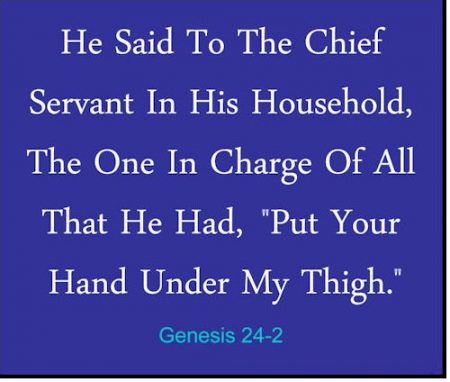 If one man said to another man, “put your hand under my thigh,” that request probably would not seem very strange in today’s openly sinful homosexual culture, but for one of God’s chosen people to do so would be rather weird. However that is exactly what happened in ancient Bible times, so there must be a logical explanation, right? Well, there is. “Putting one’s hand under another person’s thigh was an action used when swearing an oath.”1

In the story of the marriage of Isaac and Rebekah, Abraham wanted his son to have a wife from his native land, so he had his chief servant vow to find such a woman for Isaac. Here is a partial quote from the book of Genesis.

Abraham said to his servant, the oldest of his house, who had charge of all that he had, “Put your hand under my thigh and I will make you swear by the LORD, the God of heaven and earth, that you will not get a wife for my son from the daughters of the Canaanites, among whom I live…So the servant put his hand under the thigh of Abraham his master and swore to him concerning this matter. (Genesis 24:2-3, 9)2 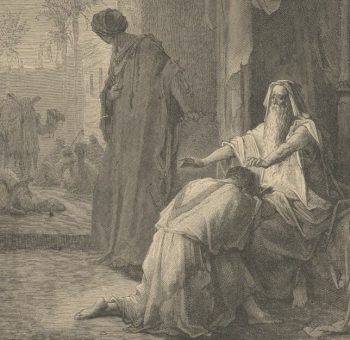 Another story from Genesis explains that at the age of 147, after being in Egypt for 17 years, Jacob urged Joseph to swear he would not bury him in Egypt, but in the land of his ancestors. “When the time of Israel’s death drew near, he called his son Joseph and said to him, ‘If I have found favor with you, put your hand under my thigh and promise to deal loyally and truly with me. Do not bury me in Egypt.’” (Genesis 47:29)

A euphemism is an inoffensive expression which is substituted for one that is considered offensive,3 and that is certainly true for the word “thigh” which, in these instances, indicates the body’s generative parts — the loins.4 The majority of translations state “under my thigh” but a search will indicate there are a few versions with different wording, such as “between my thighs” (Berkeley), and “under my leg” (Good News).5

It is true that a reference to this body part, the actual upper part of the leg, is sometimes simply physical. The thigh (the literal thigh) was chosen as a sacrificial portion of animals. Although now often eaten as food, it is not unusual that the thigh is a forbidden food among certain peoples, even today. More often however, it is regarded as the seat of procreation, the source of offspring. The “hollow of the thigh” (Genesis 32:25, KJV) is the hip socket or groin and is therefore associated with life.6

It was during the patriarchal period in the Bible that oaths were taken by placing a hand under the reproductive organ, or “thigh” as stated in scripture. “The English terms ‘testify’ and ‘testes’ witness a similar relation.” This action may represent the calling of one’s descendants as witnesses of the oath.7 When the hand is placed under, near, or upon the sexual organs, it created the sense that the oath was “being made in the presence of one’s descendants, with them as witnesses to the vow.” Some other interpretations “suggest that the powers associated with the loins are invoked in the taking of the vow, or that the covenant of circumcision is connected with the covenant established by the oath.”8 Paul Achtemeier, who was a professor of biblical interpretation at Union Theological Seminary, stated that some believed “punishment from God for breaking such an oath might include the death of one’s offspring or the fate of dying childless.”9

According to one of the most influential Jewish commentators in history, Rashi,10 the “thigh” in these Bible verses definitely does not mean the literal thigh, but means the organ of circumcision — the penis. “The reason is because one who takes an oath must hold in his hand a sacred object, such as a scroll of the Torah or phylacteries.11 And the circumcision was his (Abraham’s) first commandment and came to him through suffering. And it was beloved to him. And (therefore) he chose it (as the object upon which to take the oath).”12

Catholic biblical scholar, Taylor Marshall, has a slightly different opinion. Rather than the penis, he believes the thigh refers to swearing upon the testicles. He further shows this connection by mentioning the association between testicles and testimony being not just Semitic or Jewish. “This etymological connection between testicles and witnesses is also found in Greek, French, and obviously English.”13

Although interlaced with some controversy, there is much evidence indicating taking an oath involved touching or displaying the testicles during the Roman empire. “It is stated that under Roman law no man was admissible as a witness unless his testicles were present as evidence or ‘witnesses’ of one’s virility because only verified men were allowed to give a witness, or to testify, in legal matters. To swear by one’s testicles was an ancient form of an oath. To detest [was] . . . ‘to bear witness against;’ therefore, to curse, and implicitly, to hate to the bottom of one’s testicles.”14 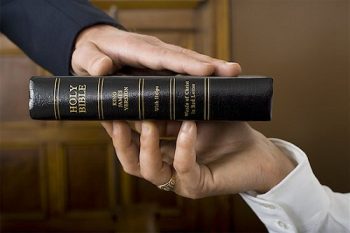 Today, many Christian societies use a Bible when making a legally binding oath, such as in a court of law or during a ceremonial event, while other religions use holy books of their own faiths. Basically, by placing your hand on these books, you are swearing or affirming your oath on a sacred document and although these documents are unlike the object used by Abraham, the idea is not all that much different. “The essence of a divine oath is an invocation of divine agency to be a guarantor of the oath taker’s own honesty and integrity in the matter under question. By implication, this invokes divine displeasure if the oath taker fails in their sworn duties.”15