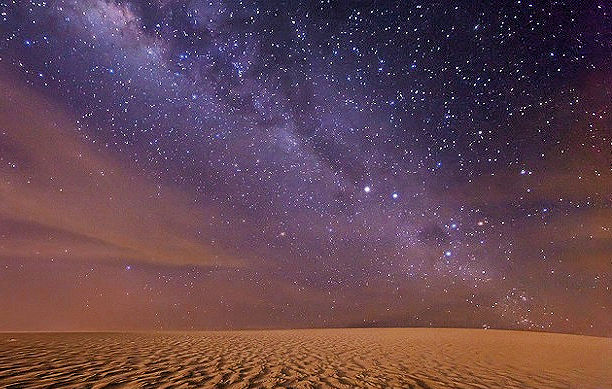 There is a situation in Genesis, when God’s selected righteous person appears to lie, which caused his wife to suffer a rather awkward dilemma. Abram (his name is later changed to Abraham) says to his wife, Sarai, “I know that you are a woman beautiful in appearance, and when the Egyptians see you, they will say, ‘This is his wife.’ Then they will kill me, but they will let you live. Say you are my sister, that it may go well with me because of you, and that my life may be spared for your sake.” (Genesis 12:11a-13, ESV).1

We will study this scripture and see if we can shed additional light upon the situation. But first, we must have more knowledge, so let’s get a better understanding with some background information.

Abram’s lineage can be traced back to Noah’s son, Shem. Abram, fathered by Terah, was part of Noah’s 10th generation after the flood, through Shem. One of Abram’s brothers, Nahor fathered Lot, before he died. And Abram took a wife named Sarai. 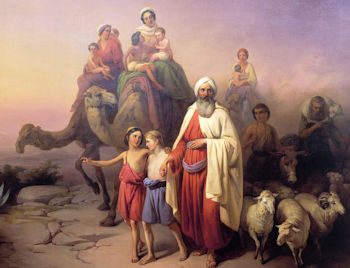 Terah planned to move, so he took his son Abram, and his grandson Lot, and his daughter-in-law Sarai, and left Ur, near the Persian Gulf, and headed inland toward the land of Canaan. When they stopped at Haran, Terah decided to settle there. Later, it is here that Abram gets a message from God, telling him to leave his country, his people, and his father’s household to continue on to Canaan, as was originally planned; he was to be shown a new land to settle.

Along with that call to Abram, God promises to make, from him, a great nation, and to bless him, and to make great his name. This promise is regarded as the first about the coming Savior, who would bring salvation to all nations. “God had long ago made it clear that the Savior would be born into the human family (‘seed of the woman’, as promised in Genesis 3:15), and now it becomes clear to Abram that it would be accomplished through his own family.”2

God also promised to bless those who honor Abram and curse those who dishonor him. So, at seventy-five years of age Abram left, along with his wife Sarai (ten years younger), and his brother’s son Lot, and their possessions, livestock, and household staff, and set out for the land of Canaan.

The direction he was to travel led to the Negeb area (Genesis 12:9), which means ‘the south’ and is basically a desert place. They were leaving good fertile land heading for the barren desert to the south, so leaving “required an unparalleled act of faith,”3 for he still did not know exactly where God expected him to stop.

Abram decides to go to Egypt

When they later reached a valley area, near the Mediterranean Sea in Canaan, called Shechem, the LORD appeared to Abram and said, “To your offspring I will give this land.” (Genesis 12:7). God’s announcement was an indication that this was the land he wanted them to have, so Abram built an altar there. However, he decides to continue on to Egypt and make temporary residence there, because there was currently a severe famine in the land they were to occupy. This would make Abram’s status that of a sojourner in Egypt, “a position between that of a native and a foreigner. Privileges are dependent solely on the hospitality of the natives of a land.”4 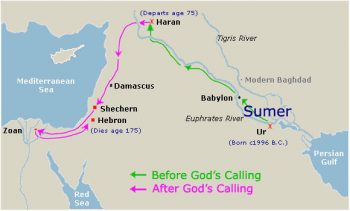 As they were about to enter Egypt, Abram explains to Sarai that she should tell everyone she is his sister. Why? “Abram fears that Sarai’s beauty will lead the Egyptians to procure her for Pharaoh at any cost. He also believes he will be killed if the Egyptians learn of their marriage . . . Abram’s fears are well-founded — the Egyptians kidnap Sarai.”

Since she was taken to the house of Pharaoh, it implies that Sarai becomes a member of his harem and he later acknowledges that he has taken Sarai as a wife.5 There is no direct statement as to if Sarai had intercourse with Pharaoh, but “becoming a wife, in these narratives, always implies sexual relations.”6

According to Egyptologist Kenneth Kitchen, “the pharaohs were commonly partial to attractive foreign ladies, as finds [artifacts] and texts for the Middle and New Kingdoms attest.”7 Besides, Abram’s very large group would have needed special permission to live and trade in Egypt. It was common that “economic and political contracts in the ancient world were sometimes finalized by the weaker party giving a woman to the leader of the stronger party. Such women would then become part of the leader’s harem (this probably explains why Solomon had seven hundred wives [1 Kings 11:3]). Sarai was the most desirable woman in Abram’s group [despite her age of 65 years], so when Pharaoh’s officials … praised her to Pharaoh, she was taken to Pharaoh’s harem.”8

Telling the Egyptians that Sarai was his sister not only saved Abram’s life, but also made him rich. Concerning Pharaoh, the Bible states he gave Abram much, “And for her sake he dealt well with Abram; and he had sheep, oxen, male donkeys, male servants, female servants, female donkeys, and camels.” (Genesis 12:6). These gifts from the Pharaoh would have been a type of dowry to the family, in exchange for taking Sarai into his harem.

Probably, Abram concocted his scheme based upon his knowledge of the Egyptians’ social laws. “In enemy territory a husband could be killed for his wife. But if Abram were known as her brother, someone wanting her would have to make marriage arrangements with him, which would possibly give him time to react in his own interest.”9

Although this plan was hatched out of fear, God’s promise to Abram was still jeopardized. He was trying to solve a problem, but instead of having full faith in God, he had taken matters into his own hands for a solution. More than just losing his wife was at stake here. Without his wife, God’s promised blessing would be doomed. To fix this dilemma and get the plan back on track, God had to bail Abram out of his mess. So, God’s promise to curse those who dishonored Abram was used to release Sarai from bondage.

”But the LORD afflicted Pharaoh and his house with great plagues because of Sarai, Abram’s wife. So Pharaoh called Abram and said, ‘What is this you have done to me? Why did you not tell me that she was your wife? Why did you say, ‘She is my sister, so that I took her for my wife?’ Now then, here is your wife; take her, and go.’ And Pharaoh gave men orders concerning him, and they sent him away with his wife and all that he had.” (Genesis 12:17-20). So Abram and his wife, and household headed back into the land in Canaan, where God originally wanted them to settle.

Was telling a lie about Sarai really the basis of the problem?

Did this problem come about because God was displeased with Abram’s lie about Sarai? No, it was caused by Abram’s bad decisions and lack of faith — that is what jeopardized God’s promise. As far as telling the Egyptians that Sarai was his sister, well, that was technically correct. He only told the Egyptians what he wanted them to know, but she was, really, his half-sister.

That description of his wife’s relationship is used again, at a later time in Genesis 20. After being confronted by Abimelech, the king of Gerar, Abraham (Abram) said, “she is indeed my sister, the daughter of my father though not the daughter of my mother, and she became my wife.” (Genesis 20:12). So, they both shared a father, but not a mother.

And he went on to say, “when God caused me to wander from my father’s house, I said to her, ‘This is the kindness you must do me: at every place to which we come, say of me, He is my brother.’ ” (Genesis 20:13). So, this was not the only time he used such a ploy; it seems this was their standard procedure.

Where are the offspring of Abraham now? 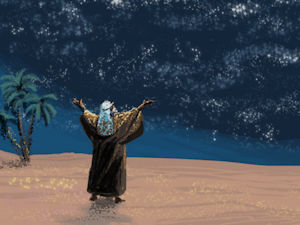 Abraham’s promised seed leads to Jesus Christ, but also to a whole world of peoples. Who are the offspring of his seed, today — the promised children? Who makes up the offspring that are as great a number as the sand on the seashore, or the stars of heaven? We are! We are the children.

My song selection for this study is “We are the Sands, We are the Stars” featuring gospel baritone Todd Suttles. Selected lyrics are below and a music video is listed in References & Notes.10

You took an old man walkin’ by the sea
Waves and sand as far as he could see
“Now count the grains of sand, that stretch across the land
Trust Me now, so shall your seed be”

When evening fell You showed another sight
The wide black velvet canopy of night
“Now number all the stars, as countless as they are
Your children shall outnumber all these lights”

→ Leave comments at the end, after ‘References & Notes’.
You can see our basic rules for comments by clicking “The Fine Print” on the top menu bar.