The Bible scholar Robert Baker Girdlestone was accurate when he stated, “The difficulty of the translator usually begins with the name of God . . . it has caused perplexity, if not dissension, in the case of many new translations.”1 This dilemma is caused by many problems inherent to the Hebrew language and the facts that it contains no written vowels, “is read from right to left . . . [and] each character of the text and its attendant symbols are read from top to bottom.”2 Also, early Hebrew writers had a fear of expressing God’s name in disrespect, so they often substituted different words relating to his position or status.

There were a great number of gods worshiped in the ancient world, so there are many words used in original Bible manuscripts which translate to the English “god.” The Greek language also has some problems, but not as many as that of the Hebrew. Most of the words for a deity, mentioned in the Bible, are all common nouns which can also mean “great” or “mighty” or “ruler.”

If all this sounds confusing, that is because it is! This article is merely an overview of a rather complicated subject, but that is unavoidable, unfortunately. At least you will understand why different versions of the Bible vary so much. You will find a wealth of detailed information, concerning this complex subject, in the references and notes at the end of the article. But, let us move on and figure out how to discern one god from another. We will examine usage in the Old Testament, first.

In Hebrew scripture, there are seven words in reference to God: Tetragrammaton (YHWH or Adonai), El, Eloah, Elohim, Shaddai, Ehyeh, and Tzevaot.3 A few other words are used, but only as description or titles. The name most often used for God is the Tetragrammaton4 (YHWH), transliterated5 Yahweh (or Jehovah) and it appears more than 6,800 times. A scholar said, “Yahweh, then, is the name par excellence of Israel’s God,”6 because the words “god” or “lord” can also be applied to other uses. 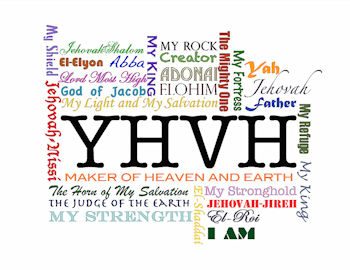 While many Bible translators and academics prefer Yahweh, the most commonly used English pronunciation in the recent past has generally been Jehovah. “That men may know that thou, whose name alone is Jehovah, art the most high over all the earth” (Psalms 83:18, KJV). The Jerusalem Bible is a modern English translation which employs the name Yahweh throughout the Old Testament. It translates this verse differently: “Let them know this: you alone bear the name Yahweh, Most High over the whole world” (Psalms 83:18, TJB). It should be noted that most modern translations just use the word LORD in this scripture.

There is another form of the name Jehovah, a shorter form, Jah or Yah, which occurs a few times. One example is in Exodus 17:16, “a hand is on the throne of Jah” (YLT), but most translators have rendered it LORD; it is also found a few times in Isaiah, and also in the Psalms. We are familiar with it in the expression Hallelujah, meaning ‘Praise Jah,’ and also in compound names such as Elijah7 and others.

In many cases, some mortal men are considered gods. Moses was called a god: “The Lord said to Moses, ‘See, I have made you like God to Pharaoh, and your brother Aaron shall be your prophet’” (Exodus 7:1).8 The Hebrew shows that LORD means Yahweh, and God means god in the ordinary sense.9 And in the first book of the Bible, Abraham is called lord: “Hear us, my lord; you are a mighty prince among us” (Genesis 23:6). In this case, lord comes from a word meaning chief, governor, or ruler. Notice the spelling in these verses. If you notice “LORD” you can be sure it only refers to God Almighty. LORD in all capital letters refers to Yahweh, while lord in small letters (or upper & lowercase [Lord]), can refer to a leader or important person only.

Even the princes of Egypt are referred to as gods: “For I will pass through the land of Egypt that night, and I will strike down every firstborn in the land of Egypt, both human beings and animals; on all the gods of Egypt I will execute judgments: I am the LORD” (Exodus 12:12).

“In the New Testament, Theos, Kyrios, and Patēr11 are the essential names”12 of God. In three scriptures, Abba13 is also used. Interesting, too, is the fact that, in Greek scripture, the Tetragrammaton is generally not used; the word used in quoting Hebrew scripture containing the Tetragrammaton in the New Testament is Kyrios, and, generally, Jesus is also referred to by that word. “The use of Kyrios in the New Testament has been the subject of debate among modern scholars, and . . . based on the Septuagint usage, the designation is intended to assign to Jesus the Old testament attributes of God.”14 Also, it is a “fact that first-century Greek translations of the O.T. did not use Kyrios as a translation for Yahweh.”15 To add to the confusion, there were sometimes other less special uses of this word. One example is that “in Classical Athens, the word kyrios referred to the head of the household, who was responsible for his wife, children, and any unmarried female relatives.”16 These facts, as you can imagine, create somewhat of a problem in translation from the Greek language. 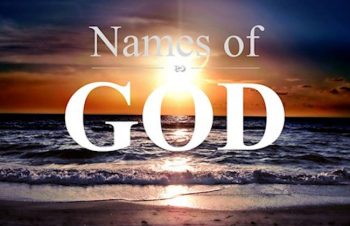 A few Bible translations have taken the liberty to substitute Jehovah or Yahweh where Kyrios – as referring to God Almighty — appears in the New Testament. Most notable is the Bible used by Jehovah’s Witnesses, although there are other non-affiliated publishers and sects that have done the same (see References and Notes at end of article for more examples).17 Doing so, at least illustrates where God’s real name probably should appear in Greek scripture.

In the New Testament, the Greek word most translated for god is theos, however it is important to point-out that this word is also a common noun applied to all types of gods, and this is easy to understand, considering the polytheism of the Greeks. Even Jesus made mention of mortal men being called gods. Jesus said, “Is it not written in your law, ‘I said, you are gods’? If those to whom the word of God came were called ‘gods’—and the scripture cannot be annulled — can you say that the one whom the Father has sanctified and sent into the world is blaspheming because I said, ‘I am God’s Son’?” (John 10:34–36).

Even Satan is called a god in the New Testament: “In their case the god of this world has blinded the minds of the unbelievers, to keep them from seeing the light of the gospel of the glory of Christ, who is the image of God” (2 Corinthians 4:4). The ruler Herod, along with many others, is also called a god: “On an appointed day Herod put on his royal robes, took his seat on the platform, and delivered a public address to them. The people kept shouting, ‘The voice of a god, and not of a mortal’” (Acts 12:21–22).

As you have read, there are many problems in translating from the original Bible languages (Hebrew, Aramaic, Greek [and all their variations] into English. It is no wonder that discerning where the name of God Almighty appears is difficult. I guess you can say that Yahweh did an excellent job when he confused the languages during the Tower of Babel debacle.

This study is but a small peek into this very complex problem. Having a dictionary of Hebrew and Greek words is, by far, the best approach to seriously studying the Bible, but here are a few basic rules you can use to better understand what scripture is saying.

In the Old Testament, the name of God (the Tetragrammaton) is not a common term like god, but is a proper and personal name for God and is not applied to any other being in the Bible. Although some Bible translations use a form of God’s real name (YHWH, Yahweh, Jehovah), most translate the Tetragrammaton as LORD or GOD. It is easy, however, to locate where God’s real name should appear in most of the common translations, because the words, LORD and GOD, are printed in small capital letters in those places.

In the New Testament, when passages from the Old Testament are quoted, in which the Tetragrammaton appears, most translators use LORD in small caps. When Jesus spoke of God Almighty, he sometimes referred to him as Father or Abba (Aramaic language). When you see this, you will know that they are referring to Yahweh. Other places, when Kyrios or God or Lord is used, it is often hard to figure whether it is in reference to Yahweh or Jesus; this is where extra study tools come in handy.

1 thought on “The Names of God in the Holy Bible”

We are committed to writing about what God wants you to know – not what some churches only want you to hear.©

Please Help and Donate to THE OUTLAW BIBLE STUDENT

Financial support for the operation of this Christian ministry and website is provided entirely by its workers and the free-will gifts of those who wish to see our work continue.

By providing a gift, you are taking an active part in helping others through teaching knowledge contained in, and related to, the Holy Bible.

Even a small token amount will help us. Thank You.