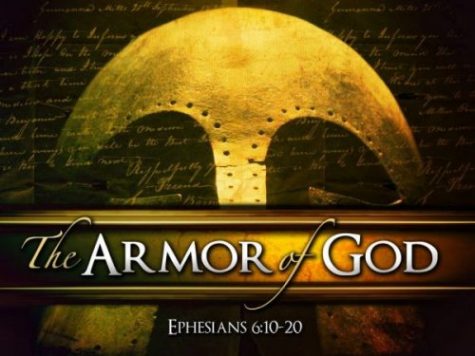 The New Testament book of Ephesians was written to the Christians in Ephesus and explains what the Christian Church is and how its members should behave. Most commentators credit the apostle Paul with authorship, but there is some debate about that. And although many dates have been given, it was probably written between 60–63 A.D. while Paul was in prison. (See notes at the end of article for more information about the ancient city of Ephesus.)1

The apostle Paul wanted to explain how Christians should live their lives to honor God and explains this by relating the new Church to the structure of the human family in the culture and times of his writing. As an example, he uses a family metaphor to illustrate the relation of Christ and the Church to that of husband and wife in marriage. “Husbands, love your wives, just as Christ loved the church and gave himself up for her” (Ephesians 5:25, NRSV).2 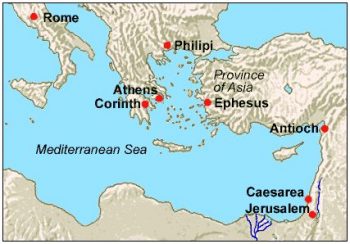 In perfection one should mirror the other, but in an imperfect world, especially today, any submission to another person includes a fear of being manipulated or mistreated, but there is no such fear with Christ, as his authority is tender guidance, not raw dominance.3 That is the way it will be in the real “new world order” yet to come.

Probably the most controversial verse of this book is verse 5:22 about wives being in subjection to their husbands, but that analysis must wait for another time, because this study will be about the more mysterious verses in Ephesians chapter 6 where, when closing his letter, he states the following.

Finally, be strong in the Lord and in the strength of his power. Put on the whole armor of God, so that you may be able to stand against the wiles of the devil. For our struggle is not against enemies of blood and flesh, but against the rulers, against the authorities, against the cosmic powers of this present darkness, against the spiritual forces of evil in the heavenly places (Ephesians 6:10–12).

Enemies of our faith

To keep the Christian Church pure and holy and to get along with each other, we must know what we face and be properly equipped to fight against the enemies of our faith. What we face and how we do battle is very important, but most people skim over these verses without appropriate thought or knowledge. ‘Wiles of the devil’ means his tricks to deceive (devious, cunning, lure, entice)4 and “is an apt description of his modus operandi.” Deception is his most effective tool and it forged the core of his attack on Adam and Eve which led humankind astray.5

Many ancient Jews thought that a belief in Satan was superstition, and today many think of Satan only as a figure of speech or imaginary figment for blame when things go wrong or when we find ourselves involved in morally wrong behavior. During my youth there was a popular comedian named Flip Wilson6 who, when caught doing something wrong, would always say, “The devil made me do it.” (See notes at the end of this article for a short comedy video on this theme.)7 But Jesus Christ knew the devil was no figure of speech, no superstition, no jest, no make-believe creature, because he knew him, had seen him, and debated with him. Jesus recognized Satan as the prince of the powerful force of evil. 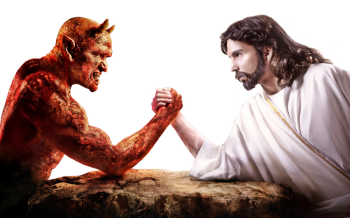 The New Testament presents Satan as real, not just some obsolete Jewish superstition and Paul impresses this certainty in the minds of the new Christians, so they will know who is the enemy. The apostle then follows this information with a detailed description of what the devil is and is not, his organization, the powers he has, and where he lives.8

In explaining what it is we face, Paul is very specific. It is not a struggle against other humans, but one against spirits. Flesh and blood foes are just mere tools of evil, the real foe lurks behind humans; the real foe is Satan himself.9 This is a spiritual war against a devious, wicked, and ruthless enemy. This war between God and Satan is in every part of the cosmos, both on earth, as well as in heaven. And now in this new age, because we model our lives after Jesus Christ and belong to him, it becomes our war as well. Satan will try to draw us away from our righteous path and if he can’t, he will harass us, impede our way, try to render us less faithful, and less serviceable to the kingdom of Christ. And Satan is not alone; he has ample help. A Bible commentator wrote the following.

In [Ephesians 6] verse 12 there is called up before us an imposing array of spiritual powers. They are “the angels of the devil,” whom Jesus set in contrast with the angels of God that surround and serve the Son of man (Matt. 25:41). These unhappy beings are, again, identified with the “demons,” or “unclean spirits,” having Satan for their “prince,” whom our Lord expelled wherever He found them infesting the bodies of men. They are represented in the New Testament as fallen beings, expelled from a “principality” and “habitation of their own” (Jude 6) which they once enjoyed, and reserved for the dreadful punishment which Christ calls “the eternal fire prepared for the devil and his angels.” They are here entitled principalities and powers (or dominions), after the same style as the angels of God, to whose ranks, as we are almost compelled to suppose, these apostates once belonged.10

Satan and his cohorts, as well as the places from which they came and those places they currently inhabit, are invisible to us, but just because they are unseen does not mean that they are not real. X-rays, radio waves, and wi-fi signals are all unseen, but real. Many colors, which other animals can see (e.g., infrared, ultraviolet) are unseen by humans, but they are all real. Gravity and magnetic attraction are unseen, but they are real. Electricity and energy radiation are unseen, but real. You get the idea. Likewise, the following things are real, too: Satan and his angels, demons, unclean spirits, evil authorities, and cosmic powers. And these locations are real as well: other principalities, other habitations, other dominions, and other realms or dimensions. These are the things Paul speaks about in Ephesians 6:12.

How to protect ourselves 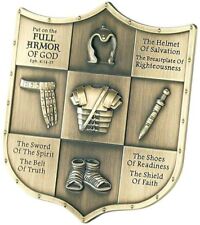 Jesus had wrestled and waged war with the devil and he had won, but as imperfect humans, we cannot win unless we have help, so Paul gave instruction because he knew we must be aware and prepared. Paul recognized the unseen powers and influences at work in the world’s human rulers and institutions. He saw the Ephesians bondage through the use of occult, astrology, magic, and spiritism. Removing Satanic and demonic items from the home is a good start and the Ephesians did so, as stated in the book of Acts.11 “Also many of those who were now believers came, confessing and divulging their practices. And a number of those who had practiced magic arts brought their books together and burned them in the sight of all” (Acts 19:18-19, ESV).

The apostle says, “Therefore take up the whole armor of God, so that you may be able to withstand on that evil day, and having done everything, to stand firm” (Ephesians 6:13), and then describes the various pieces of Christian armor as though he is equipping a soldier for battle.

Stand therefore, and fasten the belt of truth around your waist, and put on the breastplate of righteousness. As shoes for your feet put on whatever will make you ready to proclaim the gospel of peace. With all of these, take the shield of faith, with which you will be able to quench all the flaming arrows of the evil one. Take the helmet of salvation, and the sword of the Spirit, which is the word of God. (Ephesians 6:14-17).

Without this armor we will be defeated by the devil and his army, but our battle is mostly defensive — we are not to be out searching for Satan and mounting an attack, but just to stand our ground. “The armor is to put a stop to the power of demonic agenda over us . . . the armor of God is to enable us to bolt and bar the doors of our spiritual lives.”12 Their sphere of activity is in the heavenly realms and is trying to rob Christians of their spiritual blessings that God has given them.13

Although mostly defensive, there are two offensive weapons included, prayer and the sword of the Spirit (the Holy Bible), both to be used to fight back if we are ourselves directly attacked.14 Having enlisted his readers under the right leader (Jesus) to fight the right war (against evil) with the right equipment (armor of God), Paul now tells them what the right maneuvers should be. “They are to pray at all times under the direction of the Spirit (who knows what to pray for), and they are to keep themselves diligently alert in prayer and petition on behalf of other believers in the common struggle.”15

So, keep watch over our brothers and sisters, as well as ourselves, because this spiritual conflict is real. Stand firm in the faith, for our enemy intends to disrupt the entire Christian family and render us ineffective.

15 thoughts on “Ephesians 6: Evil Cosmic Powers & the Armor of God”