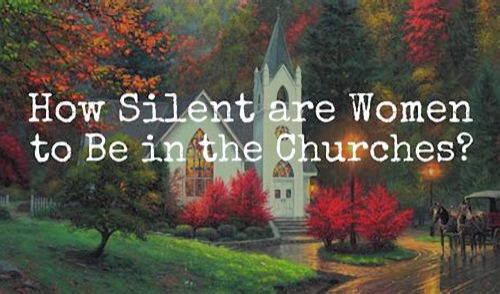 I received two letters, within the last couple of months, that raised issues concerning a woman’s place in church matters. The most recent missive asked a question about our ministry and a statement made on our website.

The black bar across the top portion of all our web pages and posts contains an information section titled ‘About OBS’ which, of course, means ‘about the Outlaw Bible Student. When placing the cursor over that option, a drop-down menu appears with two choices, and clicking the lower one will display information about ‘Our Ministry’. The question the person posed was about our ‘Mission & Beliefs’ listed on that page.

The writer quoted the part of the page that stated, “We are progressive, believing in human sexual equality and that both men and women should have equal opportunities in Christian leadership.” Then they added the question: “Surely you cannot justify that men and women are sexually equal?”

I wasn’t quite sure what attitude was being expressed; was it that women weren’t qualified to take part in Christian leadership positions, or was it that they thought it implied there was no difference between the sexes — maybe a unisex idea or something about changing genders? In today’s world, it seems that word definitions sometimes change upon the whims and political agendas of the person using them. Anyway, I answered the letter and the following is what I said.

Hummm! You posed an interesting question for our modern times. When I wrote that statement back in the late 1980s, when outlining our ministry beliefs and before any presence on the Internet, I was thinking of gender equality. 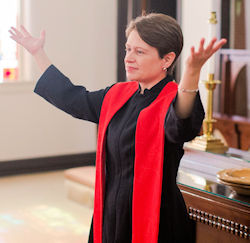 And, in that case, I most certainly do believe “both men and women should have equal opportunities in Christian leadership” (as pointed out in the ‘Our Ministry’ page). Although I feel I don’t need to justify anything, I will submit, as support for my position, the article I wrote about Priscilla. Please see: ‘Did a Woman Write the Book of Hebrews? — A Study of Priscilla’.2

If, however, someone would suggest that I am stating that a man and a woman are equal in attributes, abilities, and physical capabilities, then of course not. But I can understand why someone, in this modern day of ‘woke’ attitudes concerning gender neutrality or believing that there are dozens of different genders, would twist the meaning of my statement into something absurd. However, I am not ready to rewrite what I wrote, as this is the only question I have ever received on this matter. Nonetheless, I do reserve my right to do so, if our society and its language become much more corrupt and/or unreasonable.

About Priscilla and others 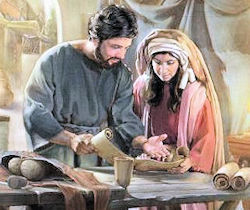 My reference above was to Priscilla, wife of Aquila and teacher of Apollos. She is traditionally listed among the ‘Seventy Disciples’ (see Luke 10:1) and considered the first example of a female preacher.3 She and her husband lived, worked, and traveled with the Apostle Paul (see Romans 16:3).4 A. J. Gordon, one of the founders of Gordon-Conwell Theological Seminary, ascribed the authorship of Hebrews to Priscilla, and said, “It is evident that the Holy Spirit made this woman Priscilla a teacher of teachers.”5

Why is The Epistle to the Hebrews attributed to the Apostle Paul, instead of Priscilla? Well, author Ruth Hoppin suggests Priscilla’s name “was omitted either to suppress its female authorship, or to protect the letter itself from suppression.”6 Although Jesus had a radical view of the status of women and demonstrated that he valued women and men equally, that was not customary in general Greco-Roman society. But equality was considered appropriate within the new Christian Church, nevertheless over time, internal Church power and political struggles corrupted the growing organization and women were demoted in status. Even today this attitude is still evident in many denominations.

Elsewhere in the Bible are other examples of equality, too. One that comes to mind is the story of Lois and Eunice teaching the future apostle Timothy. For that story, see “Eunice & Lois: Mother & Grandmother of Timothy” listed in References & Notes.7 Another example is when Phoebe was named as an overseer and deacon in the Church at Cenchreae (Romans 16:1-2). So, we learn that women did, indeed, teach men and serve as leaders; believers were urged to teach and learn from one another, without reference to gender.8

But, should women keep quiet in church?

The other letter I received was a repeat of a related issue I had been asked about many times over the years, and that was if I believed what the Bible states about women keeping their mouths shut in church meetings? They were all seeking comment or advice in reference to 1 Corinthians scripture, which states: “women should be silent in the churches. For they are not permitted to speak, but should be subordinate, as the law also says. If there is anything they desire to know, let them ask their husbands at home. For it is shameful for a woman to speak in church” (1 Corinthians 14:34-35, NRSV).9 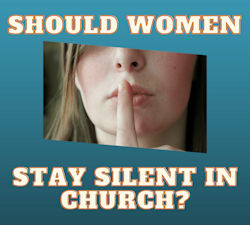 Basically, all scripture needs to be studied in the proper context to have a proper understanding. In this part of the first letter to the Corinthians, the apostle Paul, was setting forth several regulations, or directives, concerning proper church protocol. Although, at that time, there was no established order for services, it was felt they should be conducted in a fitting and orderly way.

When analyzed in the proper context, it becomes clear that the author “is not banning the public speech of women” but rather “is dealing with the very specific issue of questioning prophetic utterances. Therefore Paul is not giving an unqualified, general prohibition against the public speech of women, but is attempting to prevent speech that is potentially disruptive.” The author is “trying to prevent wives from cross-examining their husband’s prophetic speech in public,” which should be done only in the home.10

Following Christ’s lead, the new Christian church was progressive in giving women much more freedom and power than they had in the past but, because of this new freedom, they were exuberant in trying to learn as much as possible, as soon as possible, and they had a propensity to interrupt meetings and ask questions during presentations. Paul was basically saying women should refrain from interrupting with their questions and wait until later for detailed explanations.11

I believe, as do many others, that New Testament prohibitions against female leadership are contextual and not of any general prohibition. “This position asserts that the church never categorically banned women from leadership” but such consideration was on a case-by-case basis specific to each church’s situation. While some verses initially suggest a contradiction, an analysis demonstrates that although the opposition may seem apparent, it is not genuine.12

Jesus set a new standard for acceptance of women as more than just passive members of society. One can say that Christianity initiated a remarkable improvement for women. For more information concerning 1 Corinthians 14:34-35, see the article titled “Should Women Really be Silent in Church?” listed in References & Notes.13

It was difficult finding a song to accompany this article, especially one which was specifically related to the scripture in 1 Corinthians 14. However, I stumbled upon a song by Steve Winter’s ‘WinterBand’ which struck me as apropos. WinterBand, from Covington, Georgia in the United States, advertises themselves as ‘Oneness Holiness Apostolic Christians’. They take the 1963 song Shame-Shame-Shame, by Jimmy Reed (1925-1976), and adapt it in parody for highlighting women speaking in church.

I’m not really sure if they think a woman speaking in church is okay, or they are making fun of pastors for allowing this practice. But considering that most Holiness congregations have “affirmed women preachers at a time when the majority of churches refused women the right to speak in public,”14 I think they are agreeing it is okay. I don’t know these gentlemen, so my interpretation may be wrong; you tell me what you think. The song is titled ‘Shame-Shame-Shame’ and selected lyrics are below; the music video is listed in References & Notes.15

They call it Testimony,
They call it Prayer Request,
And if it suits the pastor’s whim,
Well, that’s their Bible test.

They boast how they love Jesus,
While they despise his words.
They state that’s what the Bible says,
About women and their words.

2 thoughts on “The Woman’s Place in Church”