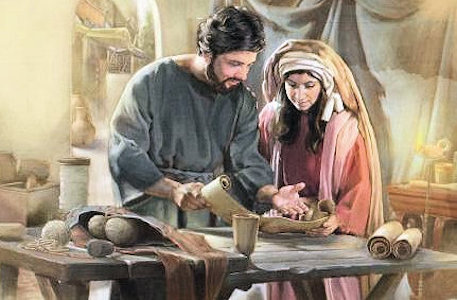 From the contents, it appears evident that the unsigned letter to the Hebrews was written for Christians who were being persecuted for their faith. Most scholars agree that this letter is specifically directed to the newest Jewish converts who may have been having second thoughts, because of persecution. These Jewish Christians were losing enthusiasm in this new faith in Christ and considering returning to their traditional Jewish cultural roots.

The letter “tells them that Jesus also suffered and knows how life is for them. It lists the heroes of faith in the past, and describes them as a great cloud of witnesses” who were urging them to go on. It was probably written in an area of strong Christian focus, such as Rome, during the 60s A.D., since the people receiving the letter had already suffered, and some were still in prison.1

Most authorities of the Greek language consider The Epistle to the Hebrews as the most polished and eloquent of any book in the New Testament.2 Although originally attributed to the Apostle Paul, a good number of historians believed otherwise and have proposed different authors, such as Clement of Rome, Silas, Barnabas, Luke, Apollos, or Priscilla. 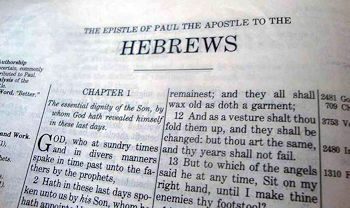 The debate has been going on for a long time. As far back as the third century, Origen3 wrote: “In the epistle entitled To the Hebrews the diction does not exhibit the characteristic roughness of speech or phraseology admitted by the Apostle [Paul] himself, the construction of the sentences is closer to the Greek usage, as anyone capable of recognizing differences of style would agree . . . If I were asked my personal opinion, I would say that the [subject] matter is the Apostle’s but the phraseology and construction are those of someone who remembered the Apostle’s teaching and wrote his own interpretation of what his master had said.”4

As author Taylor Holmes states, “It is Paul’s theology—and continues his logic. But it definitely isn’t in Paul’s voice nor does it follow many of his standard writing quirks. The author of Hebrews also quotes widely from the Septuagint (the Greek translation of the Hebrew Scriptures) whereas Paul always quoted directly from the Hebrew . . . [And] it was Paul’s style to continually refer to himself with the use of personal pronouns like I, me, my, and mine. The author of the Book of Hebrews refers to themselves only seven times in the entire book.”5

Several modern scholars are leaning toward Priscilla as the author. She was the teacher of Apollos and was married to Aquila and traditionally listed among the Seventy Disciples (see Luke 10:1), and also thought to have been the first example of a female preacher. The couple lived, worked, and traveled with the Apostle Paul (see Romans 16:3).6 A. J. Gordon, one of the founders of Gordon-Conwell Theological Seminary, ascribed the authorship of Hebrews to Priscilla, and said, “It is evident that the Holy Spirit made this woman Priscilla a teacher of teachers.”7

To have a woman given such honor and authority, at this time in history, was not only extremely rare, but sometimes detrimental to the cause. So Ruth Hoppin, author of Priscilla’s Letter: Finding the Author of the Epistle to the Hebrews, suggests, her “name was omitted either to suppress its female authorship, or to protect the letter itself from suppression.”8 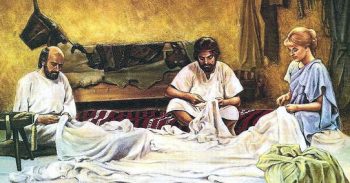 The background information of Priscilla is unknown, but she was the wife of Aquila and both were Jewish Christians. They were from Pontus, a Roman province in northeastern Asia Minor. Prisca, or Priscilla (an alternative more modern form of Prisca), is an early Roman family name, which suggests that she may have a Roman ancestry.9 Both were makers of tents and had their own business. At that time, tents were made mostly of leather and the term translated as ‘tentmaker’ also meant a ‘leather worker’ which would imply they worked on all kinds of leather goods.10

The Apostle Paul, also a tentmaker by trade, met and lived with Priscilla and Aquila when in Corinth during the middle of the first century. Although the Bible speaks about Aquila and Priscilla as missionaries traveling with Paul, the scriptures do indicate a lot about their relationship as husband and wife.

She was a Leading Teacher and Preacher

“The New Testament references to Priscilla and Aquila make it clear that, despite the male-dominant culture, Aquila was not the leader and Priscilla his assistant. In fact, of the seven times the two names are mentioned together, Priscilla is listed first five of those times (Acts 18:18-19,11 26; Rom. 16:3; 2 Tim. 4:19). Because it was the custom to list the husband’s name first, this reversal indicates Priscilla’s importance in the minds of the New Testament writers Luke and Paul. It also indicates that Priscilla was not teaching as a secondary partner under the ‘covering’ of her husband’s spiritual authority. If there were a universal spiritual principle requiring a woman to be subordinate to the teaching authority of the man, Priscilla would not have been referred to in terms indicating either her equality or her prominence in the Priscilla-Aquila teaching team.”12

This equal status would have been appropriate in this beginning Christian Church period, because Jesus had a radical view of the status of women. “Jesus demonstrated that he valued women and men equally as being made in the image of God. Luke [in writing Acts 18] clearly indicates Priscilla’s ‘agency and her interdependent relationship with her husband. She is certainly not Aquila’s property—as was customary in Greco-Roman society—but rather his partner in ministry and marriage.”13 They acted and lived as God ordained; they were united and lived as one — one in marital bliss, one in the Lord, one in secular occupation, one in their friendship for Paul, one in their profound knowledge of Scripture, and one in service to the Church.14 It was only much later, after internal Church power and political struggles started, that corrupt men took complete control of the Church organization and women were demoted in status. 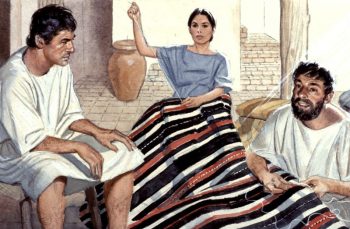 The Bible gives a peak into women’s freedom in the story of Apollos. When the Jew, Apollos, came to Ephesus, it was evident that he was not only a scholar, but an eloquent and persuasive teacher when speaking in the synagogue. After Priscilla heard him, she realized that although a learned man, he did not know the full story about Jesus.15 “Rather than correct Apollos publicly, Priscilla and Aquila . . . invited him to their home and explained to him the way of the Lord . . . more adequately” (Acts 18:25).16 In this part of the story, it was mentioned that her husband Aquila was present, but only in a secondary capacity. It is clear Priscilla was the one in charge.17

Australian author and theologian Marg Mowczko wrote, “As church leaders, there would have been many occasions for Priscilla and Aquila to teach, either informally or in slightly more formal house church meetings. Neither Luke nor Paul gives any hint of censure or disapproval about Priscilla teaching Apollos, or her role as a house church leader. In light of the fact that Priscilla did explain Christian doctrine to a man, the blanket ban by some that prohibits women from teaching men [today] must be reassessed and redressed.”18

In addition to Priscilla instructing Apollos, elsewhere in the Bible we discover that Lois and Eunice taught Timothy (2 Timothy 1:5) and Phoebe was named as an overseer and deacon in the church at Cenchrea (Romans 16:1-2). So, we learn that women did, indeed, teach men and serve as leaders; believers were urged to teach and learn from one another, without reference to gender.19

“In the book Priscilla, Author of Hebrews?, author Ruth Hoppin says she finds an apologetic feminine voice when Priscilla says, ‘I appeal to you, brethren, bear with my word of exhortation, for I have written to you briefly’” (Hebrews 13:22, RSV). Commentator Robin Cohn implies this may have meant “’I am not worthy, with the words I have, of doing justice to this important subject,’ which would be a submissive comment as if a woman had been addressing men.”20

The evidence presented leans heavily toward a feminine author for the Epistle to the Hebrews and someone with a high degree of Greek language skills, expert leadership abilities, as well as extensive knowledge of Jesus’ life and teaching. The person that best fits these capabilities was Priscilla, the wife of Aquila.

Concerning their joint activities, an author stated, “Aquila and his wife Priscilla are the most prominent couple involved in the first-century expansion of Christianity . . . Their contacts with Paul and their presence in three of the most important centers of early Christianity—Corinth, Ephesus and Rome—underline their importance in the history of early Christianity.”21

We do not know what happened to Priscilla and Aquila later in life. The last scripture that mentions them was written by the imprisoned Apostle Paul, when he sends a greeting from Rome just before he was put to death. “Greet Prisca and Aquila, and the household of Onesiphorus” (2 Timothy 4:19, NRSV).

8 thoughts on “Did a Woman Write the Book of Hebrews? — A Study of Priscilla”