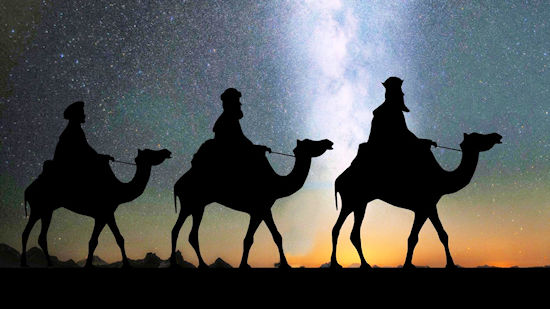 The story of the Magi (also called the Three Wise Men or Three Kings) can be found in The Gospel According to Saint Matthew, chapter 2, verses 1–12. These important travelers were searching for Jesus, and they carried gifts of gold, frankincense, and myrrh to present to him. The Magi are part of traditional nativity celebrations of Christmas and Christian tradition. It is interesting to note that these important men from distant lands were not Jews, so they were the first Gentiles to worship Jesus and bestow gifts upon him.1

Despite traditional beliefs, there are a couple of misconceptions concerning their visit to see our Lord. First, the Gospel does not indicate how many Magi there were. Christians have always assumed they were three in number, but that is probably based upon the fact that they brought three gifts.2 Accounts gleaned from apocryphal literature, such as the Revelation of the Magi, suggested the Magi were a group numbering twelve or more monk-like mystics traveling from China.3 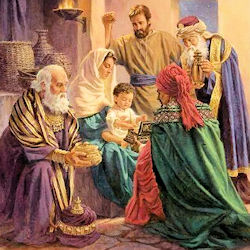 While many Christian writers do believe they came from China, some early philosophers and authors, such as Justin Martyr and Tertullian, suggested these wise men came from Arabia,4 but there are other theories, too. While most bibles indicate they were ‘from the east’, that original Greek phrase literally means coming from the ‘direction of the rising sun’.

The second misconception is that the travelers did not arrive immediately after our Lord’s birth, but quite some time later. The Bible does not specify the interval between the birth and the visit, but it took much time to prepare for the trip and then travel a long distance, so by the time the wise men located where Jesus was living, it is figured that he must have been between six months and two years of age.5

Scripture states that the Magi found him, and “on entering the house, they saw the child with Mary his mother; and they knelt down and paid him homage” (Matthew 2:11, NRSV).6 So, when Jesus was found, he was not a newborn baby in a manger, but a child living in a house with his mother. Consider this, too. When King Herod heard that the Magi were searching for the young ‘King of the Jews’ — and considering the time of birth was not known — Herod sent soldiers to kill all male Jewish children up to two years of age, in an effort to destroy the child (see Matthew 2:16-18). 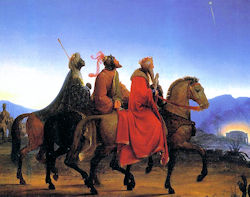 So, it is evident that the traditional nativity scene depicting the Three Wise Men arriving right after Jesus’ birth, along with shepherds and angels, is nothing more than displaying two separate incidents combined for convenience.7

One Catholic author, Dwight Longenecker, suggested another possible misconception of the Magi — riding upon camels. He said that the tribes of Arabia were famous for domesticating camels and using them in their trade caravans, and that they gave camels to Assyrian kings as tribute gifts, as well as bred them for sale and trade. However, during the reign of King Aretas III (who ruled Damascus and Lebanon after 85 BC)8 ancient Arabians adopted more Greek ways, and one of the results was the increased use of the Arabian horse as a prestigious and comfortable method of transport. “Camels continued to be pack animals, but horses were desired by those wishing to ride in style.”9 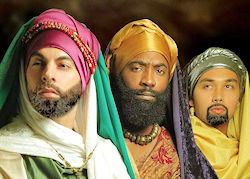 In the eighth century, a Catholic author and teacher, Bede the Venerable (Saint Bede), produced a work10 which included naming the three Magi. He wrote, “The Magi were the ones who gave gifts to the Lord. The first is said to have been Melchior, an old man with white hair and a long beard . . . who offered gold to the Lord as to a king. The second, Caspar by name, young and beardless and ruddy complexioned . . . honored him as God by his gift of incense, an oblation [offering] worthy of divinity. The third, black-skinned and heavily bearded, named Balthasar . . . by his gift of myrrh testified to the Son of Man who was to die.”11 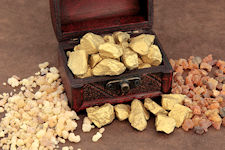 Although frankincense and myrrh have well-known uses as perfumes, cosmetics, spices, oil, and incense, some writers have suggested they also had medical uses. One bible dictionary mentions frankincense (a gum of Boswellia plants) was used to stop bleeding, cleanse wounds, and cure hemlock poisoning.14

Myrrh (a gum of Commiphora plants) was taken internally to help fever, poisoning, ear, eye, and liver complications. It was also used for pain, because of its narcotic properties. We shouldn’t forget that it was offered to our Lord mixed with wine, before his crucifixion (see Mark 15:23).15

Western Christianity celebrates the Magi on the Day of Epiphany (January 6), immediately following the Twelve Days of Christmas. This is the traditionally accepted day that the Magi visited the Christ child, and is sometimes called ‘Little Christmas’.16 Besides Church services, the celebration involves many varying customs, depending upon country and location, and is particularly important in many Spanish-speaking parts of the world where the Magi visit houses of children. Several countries have a tradition of providing special pastries for family and friends.17

There is one unique Magi custom in which I have participated many times. I was born and raised in the city of New Orleans, in the state of Louisiana, situated along the coast of the Gulf of Mexico; it is a French-Catholic region of the United States. The Christmas season there is but the start of traditional celebrations that lead all the way to Easter in the spring of the following year: Christmas, the Twelve Days of Christmas, the Day of Epiphany, Mardi Gras, Lent, then Easter.

Anyway, on the Day of Epiphany, which we called ‘Three Kings Day’, bakeries begin to sell ‘King Cakes’ which are available through the end of Mardi Gras, the day before Lent18 begins. This circular cake is made with sweet twisted dough and has a cinnamon-flavored sugary frosting displaying the colors of gold, green, and purple. Inside is hidden a small figurine of the baby Jesus and whoever gets the slice with the figurine is expected to provide the next King Cake.19 Today most citizens have forgotten the religious connection of the King Cake and just partake of them as an excuse to party.

We and our three children’s families now live in the Pacific Northwest of the U.S., but the kids still have King Cakes shipped up from New Orleans, when they are seasonally available. I hope this coming season someone saves a piece for me, for they are really delicious.

As January 6th approaches,
A cautious excitement fills the air,
For all throughout New Orleans,
Arrive the King Cakes with Mardi Gras flare.

As the King Cake boxes arrive,
At schools and offices all around,
We cut the King Cakes and sink our teeth,
Into a delicious sugary mound.

Then we all begin to wonder,
As our mouths water, and hope that maybe,
We might just be the lucky one,
To receive the King Cake Baby.
(Selected verses are from: “The King Cake Baby” by Jeffrey Pipes Guice) 20 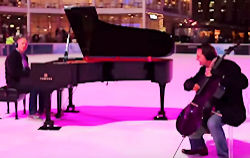 This Outlaw Bible Student web site has several articles related to the birth of our Lord and Savior, Jesus Christ. Included are studies about the two Bethlehems, the real date of Jesus’ birth, the date of Mary’s conception, and answers the question, “Was Mary really a virgin?” A list of these bible studies is in References & Notes at the end of this discourse.21

The music selection related to this article is a jazz-blues-rock-classical rendition of the Christmas song We Three Kings in 5/4 time. The artists — The Piano Guys — truly spanned the spectrum of music to produce this instrumental video. Already in New York for a 2012 television appearance, they arranged to use Citipond Ice Rink in Bryant Park for the video shoot. See References & Notes for a link to the music video.22