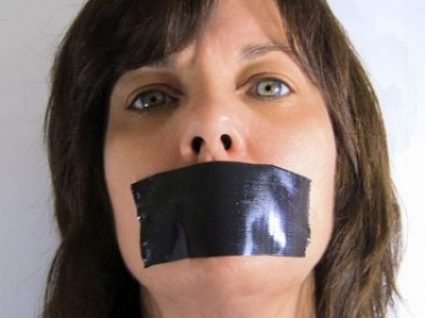 Over the years I’ve often been asked, by women, if I believed women should really be silent in religious instruction, as it says in the Bible. They were all seeking comment or advice in reference to 1 Corinthians 14:34-35, which states: “Women should be silent during the church meetings. It is not proper for them to speak. They should be submissive, just as the law says. If they have any questions, they should ask their husbands at home, for it is improper for women to speak in church meetings” (NLT).

Although that is what is written, I know religious leaders often extended that attitude to all parts of family life. Countless churches I’ve visited were led by pastors who were firm believers in women being silent, not only in church, but in all matters of religious instruction, and sometimes in their home life, too. They believed the husband was the head of the family and the wife was expected to be submissive. “Just as the Bible instructs,” would say the pastor, as he threw this scripture into her face, when a husband brings up the problem of a defiant wife. So, needless to say, my opinion on this scripture has not always been welcome by some pastors, but the following is basically my take on it.

Just to be brief, before we examine the evidence, the scripture above has nothing to do with average home life situations. I have opinions about the extent and limits of headship in the home, but that is an essay for another time. This article will only examine the meaning in 1 Corinthians 14:34-35 and other scripture to establish that women were not only allowed to speak, but also to have leadership positions in the very early church.

Basically, all scripture needs to be studied in the proper context to have a proper understanding. Paul had a particular style of writing and the readers of his letters, at the time they were written, would not need detailed descriptions about what he wrote, because they would have understood that the point he was trying to make was based upon particular situations. In this part of Paul’s first letter to the Corinthians, he was setting forth several regulations, or directives, concerning proper church protocol. Although, at that time, there was no established order for services, he felt they should be conducted in a fitting and orderly way.

Now, some people feel that there is a contradiction between 1 Corinthians 14:34-35 and 11:2-11, since both express the proper responsibilities for women in the church. But considering the larger context, you will see that they are completely different situations, so there is no contradiction at all. Bible scholar Anthony Thiselton stated that they are fundamentally compatible, saying, “this compatibility can only be recognized once the context of each passage is illuminated.” He argues that verses 11:2-11 “deal with the issue of a woman’s praying or using prophetic speech” and in that context, Paul declares that it is permissible for a woman to pray or prophesy in public, as long as her head is covered. But, in 14:34-35, when he says that it is not permissible for women to speak, he has a different type of speech in mind.1

When analyzed in the proper context, it becomes clear that “Paul is not banning the public speech of women” but rather “he is dealing with the very specific issue of questioning prophetic utterances. Therefore Paul is not giving an unqualified, general prohibition against the public speech of women, but is attempting to prevent speech that is potentially disruptive.” He is “trying to prevent wives from cross-examining their husband’s prophetic speech in public,” which should be done only in the home.2

Following Christ’s lead, the new Christian church was progressive in giving women much more freedom and power than they had in the past but, because of this new freedom, they were exuberant in trying to learn as much as possible, as soon as possible, and they had a propensity to interrupt meetings and ask questions during presentations. Paul was basically saying women should refrain from interrupting with their questions and wait until later for detailed explanations.3

I believe, as do many others, that New Testament prohibitions against female leadership are contextual and not of any general prohibition. “This position asserts that the church never categorically banned women from leadership” but such consideration was on a case-by-case basis specific to each church’s situation. While some verses initially suggest a contradiction, an analysis demonstrates that although the opposition may seem apparent, it is not genuine.4

A more contemporary translation of 1 Corinthians 14:34-35 is taken from another Bible version. “Wives must not disrupt worship, talking when they should be listening, asking questions that could more appropriately be asked of their husbands at home. God’s Book of the law guides our manners and customs here. Wives have no license to use the time of worship for unwarranted speaking” (The Message).5

It is also evident, elsewhere in the New Testament, that the early church gave great latitude in the services of women in leadership positions, so it is no surprise they undertook active church participation. “From the very start—the birth, ministry, death and resurrection of Jesus—women were significantly involved. In fact, women were the major witnesses of his crucifixion and resurrection.”6

Paul gives the title ‘deacon’ to Phoebe. “I commend to you our sister Phoebe, who is a deacon in the church in Cenchrea. Welcome her in the Lord as one who is worthy of honor among God’s people” (Romans 16:1-2, NLT). “It probably designates an ‘office’ although it may mean ‘minister’ in the same sense that Paul uses it elsewhere of himself and others.”7 “The four daughters of Philip appear in Acts 21:9 as prophetesses.” They were also viewed by the Christian historian, Eusebius, as belonging to apostolic succession. And there are other examples, too.8

As mentioned, Jesus set a new standard for acceptance of women as more than just passive members of society. One can say that Christianity initiated a remarkable improvement for women. In one confrontation, Jesus spoke up for a prostitute in John 7:53-8:11, when he shames the crowd that wanted to stone her.

Another interesting story is that of Jesus preaching at the home of sisters Martha and Mary. While Martha works in the kitchen preparing a meal, Mary sits at Jesus’s feet listening to what he said. Martha complains that Mary should be helping in the kitchen and Jesus interjects to the contrary saying, “Martha, Martha, you are worried and distracted by many things; there is need of only one thing. Mary has chosen the better part, which will not be taken away from her” (Luke 10:38-42, NRSV). Any later push-back or retreat of women’s liberation and progress that Jesus began, happened long after the start of Christianity, when men’s rule overtook that of the established Church.

4 thoughts on “Should Women Really be Silent in Church?”