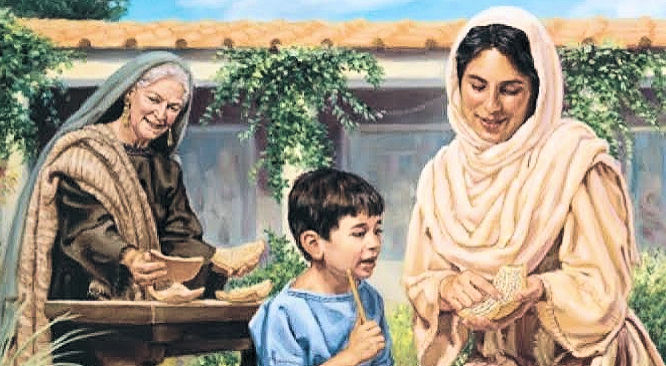 Although Paul the Apostle gets all the credit for being Timothy’s mentor, the young boy’s introduction into the Christian faith must be attributed to the love expressed by his mother, Eunice, and his grandmother, Lois. This was not just the normal love of a mother and grandmother toward the child, but also their love for our lord and savior, Jesus Christ.

There isn’t a whole lot written about these women in the biblical record, and even less about their husbands. But we can piece together some facets of Timothy’s early spiritual instruction and the women’s transformation to Christianity, to better understand how his life’s path was influenced and directed by these two female Jewish converts.

Lois (the boy’s grandmother) was a devout Jewish woman, whose name means ‘agreeable’ or ‘desirable’.1 All we know about the grandfather was that he was probably Greek and gave his daughter a Greek name: Eunice. This is derived from the name Nike, the Greek goddess of victory. ‘Nike’ (or ‘nice’) was a favored ending for Greek female names during the Greco-Roman age.2 Both women lived in the city of Lystra in Asia Minor (now present day Turkey), an area where most people worshiped the gods of Greece.3 Being a Jew, Lois obviously instructed her daughter in the Hebrew scriptures, and raised her child to love Jehovah, as the one real God Almighty.

When her daughter Eunice was older, she too married a Greek husband (Acts 16:1) and being a gentile, he was an unbeliever of the Jewish faith. And to them was born a son, whose name was Timothy. The name Timothy means ‘one who fears God’, so it was probably Eunice that picked the name for her son. Nothing else is told about either the father or grandfather, so many believe they may have died.4 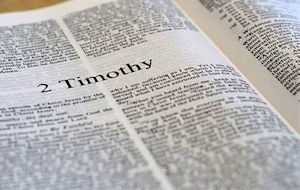 Whether they died or just didn’t have any spiritual role in the boy’s upbringing, we know they had no interest in their wives’ religion, for Timothy was uncircumcised (Acts 16:3), a religious requirement for all Jewish males.5 Because of this situation, it is likely that the women and child faced some challenges in their social life and perhaps even shame, for it is unlikely Timothy had been accepted as a full member of the Jewish community.6

These two godly women, Eunice and Lois, trained Timothy to know and love both God and the Hebrew scriptures. The Apostle Paul even praised Lois in a letter to Timothy “as one who passed on the mantle of faith to both her daughter and her grandson.” While grandmothers are mentioned elsewhere in the Bible, it is only in the New Testament’s second letter to Timothy that the term ‘grandmother’ is actually used.7 “I am reminded of your sincere faith, a faith that lived first in your grandmother Lois and your mother Eunice and now, I am sure, lives in you” (2 Timothy 1:5, NRSV).8

The Conversion of Lois and Eunice

It has been suggested that Lois, Eunice, and Timothy may have been kinfolks of Paul, consequently his apparent intimacy with the family and his knowledge of their faith.9 This is reasonable, for the cities of Lystra and Tarsus (Paul’s birth city) are both in modern day Turkey.10

Then again, maybe they first became acquainted during Paul’s first journey to Lystra. Either way, it appears that his first visit was when Lois and Eunice were converted to Christianity, by accepting Paul’s preaching of Jesus. From that point, Timothy would have grown up as a Christian, too.

On Paul’s first trip to Lystra, some Jews caught up with him to turn the gentile populace against the missionary. They stoned Paul and dragged him out of the city, supposing that they had killed him.11 “But when the disciples surrounded him, he got up and went into the city” (see Acts 14:19-20).

Those of you who remember Dale Evans (yes, the cowgirl wife of cowboy star Roy Rogers back in the mid 20th century), here is a plausible thought she wrote about that event. “I have no way of knowing, but I can’t help thinking that Lois and her daughter were among those believers who watched the miraculous recovery of Paul.”12 If there was any doubt about Paul being a messenger of God, that event may have helped Lois and Eunice to accept his ministry.

By the time Paul visited the area the second time, Timothy’s home training showed how well his mother and grandmother prepared him to give Paul and his gospel a good welcome.13 As stated in Acts, the Apostle Luke wrote the following.

“Paul went on also to Derbe and to Lystra, where there was a disciple named Timothy, the son of a Jewish woman who was a believer; but his father was a Greek. He was well spoken of by the believers in Lystra and Iconium. Paul wanted Timothy to accompany him; and he took him and had him circumcised because of the Jews who were in those places, for they all knew that his father was a Greek. As they went from town to town, they delivered to them for observance the decisions that had been reached by the apostles and elders who were in Jerusalem. So the churches were strengthened in the faith and increased in numbers daily” (Acts 16:1-5). 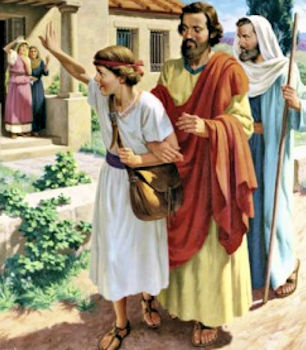 Although no longer required as necessary for anyone to become a Christian, Timothy’s circumcision was necessary for a specific reason. He was Jewish because of the matrilineal principle of descent and he knew the sacred writings, but his uncircumcised state implied that his upbringing was not characterized by a strict observance to the Law (2 Timothy 3:15).14

The controversy over circumcision was still alive during this period, so to avoid unnecessarily hindering Timothy’s acceptance, Paul had him go through the religious rite. Circumcision made Timothy more acceptable to the Jews at that time and made him ideal to accompany Paul on his missionary journey.15

Paul planted churches around the Mediterranean area and converted thousands to Christianity. As his ministry grew, he realized he needed a trustworthy person to help him, as well as carry on after he died. God had directed him to young Timothy. As Timothy was from a mixed marriage (Jewish-gentile), he had just the background needed for such an important job.16

Not all children have godly parents, but Eunice and Lois trained Timothy in the proper way (Proverbs 22:5) and I’m sure they were gratified as Timothy set out to do the work of an evangelist (2 Timothy 4:5). As a famous author, Herbert Lockyer, wrote: “The important feature we glean from the record of Timothy is that of the value of positive Christian training in the home.” And I’m sure Timothy continually praised God for providing a home in which he was exposed to the love and strong faith in God shared by his mother and grandmother.17

As noted in past treatises, sometimes it is difficult to find a professionally produced music video on certain biblical topics and that is the case for this article. However, I did stumble across a well-written song concerning my discourse subject about Lois, Eunice, and Timothy. This is selected for all the mothers and grandmothers that may be reading this study. You never know how much you may influence those children or grandchildren with your love and instruction.

Written by a pastor’s wife for a special church service, Elaine Serrano sings “Unfeigned Faith” along with two close friends (spiritual sisters), who are also mothers, all expressing thoughts of their faith in the Lord. Selected lyrics are below and the music video is listed in References & Notes.18