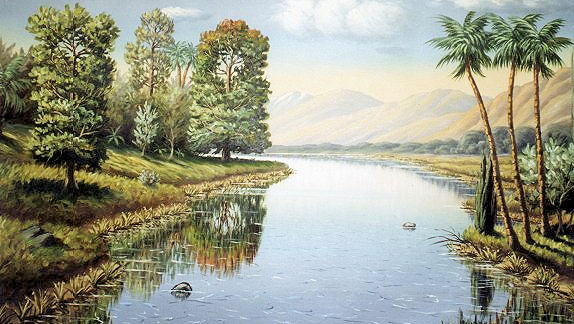 This article is about me, but don’t worry, for there is a Bible study here too. It is just that the idea for its subject matter came about because of thoughts concerning my current place in this world and my future. I will add that I dedicate this article to my wife Mary, who has faithfully supported my work and made suggestions which I incorporated into my articles. You will see further on how much I appreciate all that she has done. So, I will explain why I’m writing this in a moment, but let me lead up to that reason at my own pace.

Listen to this article: Click the > button to start audio – click again to pause – click the speaker icon to mute.  Adjust the volume on the right side.

Lately, I’ve been thinking about the Jordan River. Now understand that I’m not talking about the Jordan River in the U.S. state of Utah, but the one that separates the borders of Israel and Jordan in the Middle East — the River Jordan mentioned in the Bible. You may remember this is the river that the tribes of Israel crossed to enter the Promised Land (Joshua 3:14-17), where the leprosy of Naaman was cured (2 Kings 5:1-14), and the place where John baptized Jesus (John 1:29-34). Actually, this river is mentioned some 195 times in scripture.1 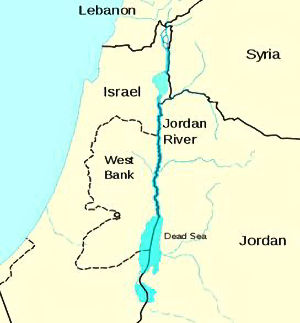 This flowing body of water, called the Jordan River2 drops down quite a bit over its course. The name means “to flow down” or “descend.”3 It is positioned in southwest Asia and flows through the Great Rift Valley, including the Sea of Galilee, and then into the Dead Sea. There it has the lowest elevation of any river in the world and, because of its winding course, it is 223 miles (360 kilometers) in length.4 It starts high on the slopes of Mount Hermon, but drops to 1,410 feet (430 meters) below sea level at the Dead Sea, the lowest land point on Earth.5

The biblical importance of this waterway has also been symbolic in contemporary ways, too; it is one of the most cited rivers of the western world. For instance, because of its rich spiritual importance, “it has provided inspiration for countless songs, hymns, and stories.” This includes popular folk songs, as well as traditional African-American spirituals.6 Consider songs such as ‘Michael Row the Boat Ashore’ which says: “Jordan’s river is chilly and cold, Hallelujah; Chills the body, but not the soul, Hallelujah.” Or the ever-popular ‘Ol’ Man River’ which says: “Show me dat stream called de River Jordan, Dat’s de ol’ stream dat I long to cross.”

Crossing the Jordan River symbolizes freedom into a promised place; it is the final step of a journey. “It often refers to a freedom that comes after a long season of adversity and waiting.” And it often represents “freedom from oppression, breakthrough, and deliverance.”7

This was the same reasoning for the naming of the Jordan River in the United States. In 1847, several parties of Mormon pioneers arrived in Salt Lake Valley, they crossed a river and bathed in the Great Salt Lake. The yet unnamed river drained into the salty lake waters, similar to the biblical River Jordan draining into the Dead Sea. This similarity influenced the name for the river.8 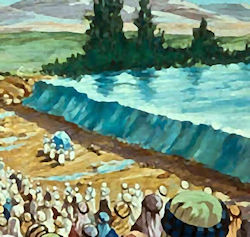 In the Bible, after leaving Egypt, the Israelites journeyed to the land God promised them. Upon reaching their destination, the River Jordan was both an obstacle as well as a pathway to reach their prize. After forty years of hardship, the land of ‘milk and honey’ was within sight. But the usual shallow water of the river was blocking the way because it was at its high point of the year, at flood-stage. God instructed the priests to carry the Ark of the Covenant and stand in the water. Obeying his direction, the river’s flow immediately stopped, therefore making a way for the people to walk across (Joshua 3:15-17).9

The location of this crossing was from the plains of Moab (Joshua 13.22) into the land of Canaan (Joshua 3:14-17). This place was opposite the city of Jericho, where Joshua’s first battle took place. (For a study concerning this battle, see “How did the walls of Jericho come tumbling down?” listed in References & Notes.)10

Let me wrap this up! 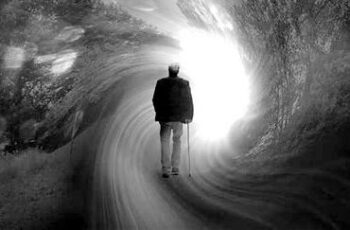 If you have read many of my articles, you probably know by now that I am in the winter years of my life. Next August will be my 80th birthday. And thinking of death is rather common for the elderly, because we never know what tomorrow will bring.

Although I have the common aches, pains, and problems for someone my age, I have no known current health issues that would end my life, but at my age the odds of my death drastically increase as time moves forward. I know that on one of those days, in the not-too-distant future, the Grim Reaper will come knock upon my door. I’m not afraid, for I know my future is in the hands of our Lord, besides I’ve been well exposed to death since I was a child. (For an article on the Grim Reaper, see References & Notes.)11

In New Orleans, where I was born, small children were not sheltered from the dying and death events of others, as they are in many places. For instance, I was a pallbearer at my grandmother’s funeral when I was twelve years old. I remember going to many wakes12 and funerals before I was a teenager; the passing of many elderly family members provided those opportunities.

In adult life I suffered through the death of a son, and two of my children have suffered the same grief in their own families. In addition, I have performed many memorial and funeral ceremonies as a Christian minister. So death has often touched my life, one way or another, over the years. Death will touch us all, sooner or later, just as scripture says. And as odd as it sounds, death is a part of life. It is the last event in our existence here — one that everyone will experience — at least in this present world.13

God’s word however, promises that it won’t always be this way. We will have an opportunity for everlasting life in a new world prepared for the followers of Jesus Christ. Our Lord had provided a better life for the tribes of Israel when they crossed the Jordan River into the Promised Land, but we will receive eternal life in a new promised land. That is why when I think of the end of my days, I also think of the River Jordan and what it represents.

The song selected for this article is a favorite of mine; it is ‘Far Side Banks of Jordan’ written in the 1970s by Terry S. Smith, a friend of Johnny Cash. It is a parting song to a loved one and is filled with emotions. “But at the same time, it offers comfort and assurance that such a great love built on earth would stay stronger than death.” It underscores what is most important in a good marriage, and that is everlasting love.14 Here are the words to that song.

I believe my steps are growing wearier each day,
Still I’ve got a journey on my mind.
Lures of this old world have ceased to make me wanna stay,
And my one regret is leaving you behind. 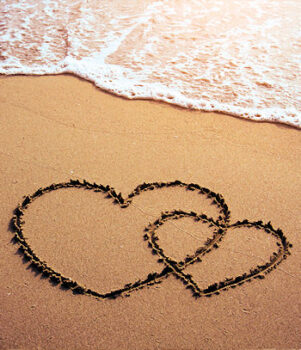 If it proves to be God’s will that I am first to cross,
Somehow, I’ve a feeling that it will be,
So, when it comes your time to travel likewise, don’t feel lost,
For I will be the first one that you’ll see.

Through this life we’ve labored hard to earn our meager share,
It’s brought us trembling hands and failing eyes.
I’ll just rest here on this shore and turn my eyes away,
Until you come, and we’ll see paradise.

I’ll be waiting on the far side banks of Jordan;
I’ll be waiting, drawing pictures in the sand,
And when I see you coming I will rise up with a shout,
And come running through the shallow waters reaching for your hand.

If my life ends first, as this song imagines, I hope my wife Mary will recall the words of this melody. As in the song, I truly believe I’ll be patiently waiting for my true love to return to me.

Although there were many who recorded this song over the years, my current favorite performance comes from Ireland, the second-largest island of the British Isles. It is sung by the teenage gospel singer Owen Mac,15 and actor/folk singer Tony Allen.16 This music video is listed in References & Notes.17