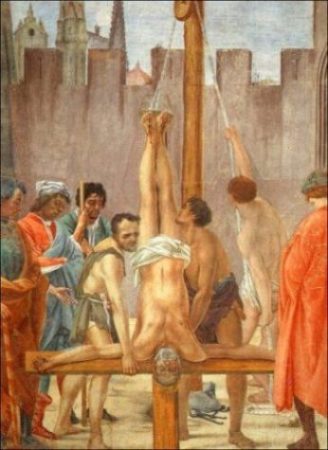 Crucifixion was a regular mode of capital punishment among early pagan nations, and most likely originated with the Persians and then spread to the Assyrians, Germans, Celts, Britons and others. This punishment was “primarily reserved for traitors, captive armies, slaves and the worst of criminals” and was common under the rule of Alexander the Great (356-323 BC).1 Crucifixion was only used occasionally by ancient Jews, while their usual method of capital punishment, according to the Mosaic law, included stoning, burning, beheading, and strangling.2

Methods of crucifixion varied considerably depending upon location and time period and, when used, it was a most horrible form of torture and execution that involved fixing a person to a wooden post or tree using ropes or nails.3 Crucifixion is well-known today only because it was the method of execution used in the death of Jesus Christ.

Important Facts about the Crucifixion Cross

We must first understand a very important fact — the word “cross” is derived, not from its physical shape, but comes from the Latin “crux” (pronounced: kruhks), which referred to a tree or any construction of wood used to hang criminals as a form of execution. It was only later that crux came to refer specifically to a contemporary cross.4 There are four basic structures or types of cruxes that were used for crucifixion:

There is sometimes argument concerning the type of cross used in Jesus’ execution. Most Christians assume it was the Crux Immissa (pole with crossbeam), because that is the most used artistic representation seen today. But a few denominations, particularly Jehovah’s Witnesses, suggest (almost promote) the idea that it was the Crux Simplex (single pole). Without having been there to observe the crucifixion, we can only speculate, but research can give additional information from which we can make our own decision about what method was used.

When crucifixion was used for execution in the Old Testament, it usually consisted of a single wooden stake. The body was either impaled with the stake, such as dictated by the Persian King Darius (Ezra 6:11), or tied or nailed to it and then the corpse was left to rot. But when crucifixion was used by the Jews, or as punishment to a Jew by other peoples, the Mosaic law stated that the “corpse must not remain all night upon the tree; you shall bury him that same day” (see Deuteronomy 21:23, NRSV).5

On What Type of Cross was Jesus Crucified?

Even the Roman method of crucifixion, used during Jesus’ time, varied greatly. Roman philosopher Seneca the Younger (4 BC – AD 65) said of his travels that he saw crosses “not just of one kind but made in many different ways: some have their victims with head down to the ground; some impale their private parts; others stretch out their arms on the gibbet.”6

Although there are many references, in the Bible and in paintings, of Jesus carrying his own cross (at least part way), it was very unlikely that he or any single person did, because the whole cross could have weighed over 300 pounds (136 kg). In some cases however, those condemned to death were forced to carry only the crossbeam of a Crux Immissa, which weighed much less.7 Many modern scholars take the Gospel descriptions of Jesus (and then Simon), carrying only a crossbar to the pole already set in the ground at Golgotha.8

In the books of Matthew, Mark, and Luke, are described similar accounts of a passer-by being recruited to carry Jesus’ cross. In Luke 23:26 it states: “As they led him away, they seized a man, Simon of Cyrene, who was coming from the country, and they laid the cross on him, and made him carry it behind Jesus.”9 It is very possible, I guess, that the man ‘helped’ Jesus by lifting and carrying one end of the cross to help with its transport.

There is another possibility, too. Maybe Jesus could have carried the whole cross, if it was a single pole — a Crux Simplex. The Apostle John said, “So they took Jesus; and carrying the cross by himself, he went out to what is called ‘The Place of the Skull,’ which in Hebrew is called Golgotha” (John 19:16-17). The word translated “cross” in this instance is the Greek staurŏs, which can mean a stake, post, pole, or cross.10

As you can see, there is a lot more to the story, but nothing specific to indicate the exact type of crux that was used in the crucifixion of Jesus. We can only state with certainty that he died by crucifixion, but not by which variety of crux. Does it really matter? Well, I guess so to some extent, just so we could have an accurate account, but looking at the bigger picture, it is what he died for that is most important, not the shape or construction of the crux.

I guess that Jehovah’s Witnesses and a few others could be right in that Christ was crucified on a single pole — but then again, the same could be said for those folks in the majority, who say it was on a pole with a crossbeam. As a matter of fact, it could also have been neither of those types. The only real fact is that we just don’t know for sure.

Update: 13 March 2021
Since writing this article, there has been another study published, that considers some issues concerning the time of Jesus’ death and resurrection. It addresses the debate about if Jesus really died on Friday and was raised on Sunday. That article is titled “Was Jesus in the Tomb for Three Days and Three Nights?” and the link is: https://outlawbiblestudent.org/was-jesus-in-the-tomb-for-three-days-and-three-nights/

→ Leave comments at the end, after References & Notes.
OBS respects your privacy and is compliant with the European Union GDPR regulation. Click here to read.

9. Unless otherwise noted, scripture quotations are from the New Revised Standard Version Bible (NRSV), ©1989 the Division of Christian Education of the National Council of the Churches of Christ in the United States of America. Used by permission. All rights reserved.

9 thoughts on “Crucifixion of Christ: Was a Cross or Pole Used?”