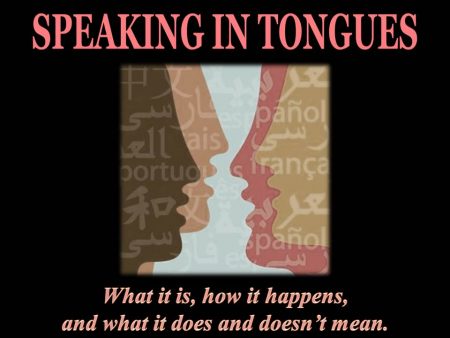 Speaking in an unknown language, as many do in today’s Pentecostal, Charismatic, Catholic, and a few other Christian religions, is generally considered a New Testament phenomenon. This ability was received as one of the miraculous spiritual gifts given to the apostles after the death of Christ and is known as “speaking in tongues.” Although it can technically mean speaking in a foreign earthly language, it is most often considered to be a language of the spirit, or of angels, or even of heaven, and this practice is called glossolalia.

According to Encyclopedia Britannica, “glossolalia” (from Greek glōssa, “tongue,” and lalia, “talking”), consists of utterances approximating words and speech and is usually produced during states of intense religious experience. The vocal organs of the speaker are affected — the tongue moves, in many cases without the conscious control of the speaker and generally unintelligible speech pours forth. Both speakers and witnesses generally interpret the phenomenon as having a conversation with divine beings or the channeling of a divine proclamation.1 The Merriam-Webster Dictionary adds that it is emotionally charged speech that mimics coherent speech and is uttered in states of religious ecstasy or schizophrenic states.2

Debating the validity of this practice is not my intention, for people have been doing so since the early days of the 20th century, when the modern “speaking in tongues” movement began. My mind is already made up, but my intention for this article is only to present a contrary opinion and let the reader decide what to believe.

When Did It Start? 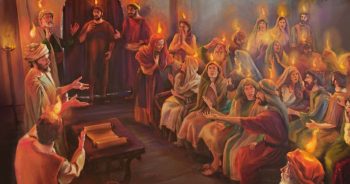 The whole idea of “speaking in tongues” comes from verses in the book of Acts, chapter 2, which states:

When the Day of Pentecost had fully come, they were all with one accord in one place. And suddenly there came a sound from heaven, as of a rushing mighty wind, and it filled the whole house where they were sitting. Then there appeared to them divided tongues, as of fire, and one sat upon each of them. And they were all filled with the Holy Spirit and began to speak with other tongues, as the Spirit gave them utterance (Acts 2:1–4, NKJV).

It should be noted that most Bible versions translate the word “tongues” as “languages.” In fact, one of the most dynamic translations of these same verses is from The Message Bible, which states:

When the Feast of Pentecost came, they were all together in one place. Without warning there was a sound like a strong wind, gale force—no one could tell where it came from. It filled the whole building. Then, like a wildfire, the Holy Spirit spread through their ranks, and they started speaking in a number of different languages as the Spirit prompted them (Acts 2:1–4).3

If this information isn’t enough to indicate they were speaking in other earthly languages, read verse 8 in most any version and you will understand that the languages were ones that could be fully understood by the people hearing them. “And how is it that we hear, each of us, in our own native language?” (Acts 2:8, NRSV). So, they began to speak with other languages, besides their own native language, even though they never learned it. They didn’t spout some meaningless babel or “stammer out some broken sentences, but spoke it as easily, properly, and elegantly, as if it had been their mother-tongue.”4

It is evident to me that this event was a heavenly gift so that knowledge about Jesus Christ could be given to those of other nations — foreigners that had not, yet, heard the Gospel. The whole idea of speaking in different languages was to make sure that what was said could be communicated to, and understood by, the people in the assembly. Speaking with some strange mystical mumbling noises would have defeated that purpose.

A Glorious and Blessed Reason 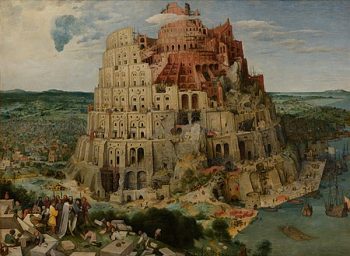 There was a deeper purpose, too, I think. In fact, like the English Christian minister and writer Matthew Henry, I relate the miracle at Pentecost to the scattering of people through a confounding of languages in the book of Genesis at the tower of Babel dispersion. Henry said that the dividing of language at Babel was the casting-off of the pagans, as they lost the language of which God was spoken about and preached. But Pentecost reversed this process by restoring the knowledge of God to all nations.5 This gift at Pentecost allowed the apostles to reach and teach people of different lands and languages and as Paul said, “Tongues, then, are a sign not for believers but for unbelievers…” (1 Corinthians 14:22, NRSV). The curse of Babel in Genesis 11, was dramatically reversed by this Pentecost event.6

The apostles were speaking in real earthly languages during and after Pentecost, but this was no precedent to continue this miracle forever. There is neither a command in the Bible to continue speaking in tongues, nor even a promise that certain people will be able to speak in tongues. There is not even a hint in the Bible, anywhere, that if you are filled with the Holy Spirit, the evidence is an ability to speak in tongues.7

The gifts given at Pentecost, I believe, were temporary and meant for a particular purpose. The Lord even revealed to Paul that they were going to cease (1 Corinthians 13:8-12). These gifts ceased by the end of the Books of Acts, as “there is no record in Scripture of any of the sign gifts operating in any of the letters that Paul wrote after the end of the Acts period.”8

Being in the Spirit?

Speaking in tongues is sometimes called “being in the Spirit” and it very well may be — only it may not be the Holy Spirit of God, but of something most sinister. If you speak in tongues, or associate with those that do, be extra careful that this language has God’s purpose in mind. Give this essay some thought and pray over the situation. Don’t get caught up in the wrong kind of spirit.

11 thoughts on “Speaking in Tongues — Is Glossolalia Real?”