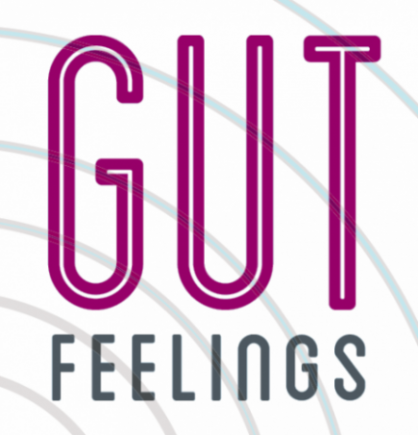 I remembered hearing, on the news some time back, of someone having experienced apprehension when arriving at the airport to board a plane and decided not to travel. You can see where I’m going with this; yes the plane crashed and she avoided death. I’ve never had such a dramatic situation as that, but I have had gut feelings about minor things and learned later that I was correct in following “my gut.” Little things, like ‘don’t go down that street,’ or ‘getting a bad feeling about someone that I was introduced to,’ or ‘I don’t feel right about doing what I am asked to do.’

Most of us have had that kind of feeling – that gut feeling that nudges us one way or another. How do we explain such events? Is it just coincidence? Or is it intuition, instinct, or some other sort of sense? There must be an explanation, right? A dictionary says that instinct is the natural tendency that a person has to behave or react in a particular way, and intuition is an unexplained feeling you have that something is true even when you have no evidence or proof of it.1

Now, let’s get this straight; instinct is a natural tendency and intuition is an unexplained feeling. So, I guess instinct is an ability built into us to make one choice over another, and as one author put it, we “are born with a certain toolbox full of strategies and social impetuses to help us survive.”2 This would be a baby knowing how to feed, or the ‘fight or flight’ instinct we have when facing a dangerous situation. If the gut feeling we sometimes get is not a natural tendency, then it is not instinct. I would extrapolate that a gut feeling must be intuition – it must be a sixth sense we have received from God along with the other five.

How are Gut Feelings Processed? 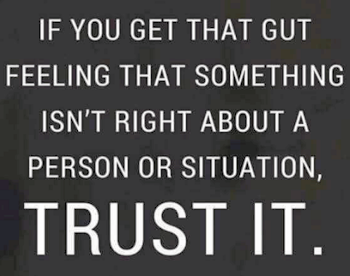 Feelings from intuition seem to come from the gut, hence the term ‘gut feeling,’ and there has been serious scientific research about how this works. “When people talk about going with their gut feelings on an important decision, what they’re referring to is an intuitive knowledge based on the close relationship between our emotions and the sensations and feelings in the gastrointestinal (GI) tract.”3

Research using paired subjects, one learning of an event before showing it to the other, indicated that the waiting subject emotionally responded to the event before it was evident. The waiting subject was receiving the event information as the first subject learned of it, but before it could be displayed. When learning of this extraordinary research, Rollin McCrary of the Institute of HeartMath, questioned exactly where the shared physical anticipation of an event was felt in the body. Through research measuring electromagnetic waves, he discovered that the foretelling information was felt in the heart as well as the brain, but even more interesting was that the heart received the information prior to the brain.4 Did the heart receive the signal from the other person, or was there more to it? 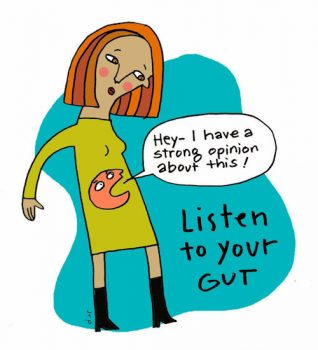 After another researcher, John Armour, of the University of Montreal, discovered neurotransmitters in the heart could signal higher thought in the brain, McCrary discovered that, with two people, touch or thought could create coherent heart rhythms that would entrain5 both brains (a sort of synchronization; see reference note). And later, Dean Radin and Marilyn Schlitz did research which explored if this action extended elsewhere in the body and thought an obvious place to explore was the gut.

They gathered pairs of research volunteers and, using electrogastrogram (EGG), ran experiments which indicated another example of entrainment, this time in the intestines. This new evidence established the proof that our emotional responses can be transmitted and received by those close to us and gives new meaning to the phrase “gut feeling.”6 As Radin and Schlitz concluded, “this experiment suggests that some somatic7 [or bodily] feelings may be associated with perceptions transcending ordinary, sensory capabilities.”8 So, the emotional response is first received in the gut, then the heart, and finally the brain. But why the gut first?

Cell for cell, our bodies are made up mostly of bacteria and most of these single-celled organisms live in the gut. The gut has “a stunningly complex neural network capable of leveraging this bacterial ecosystem for the sake of both physical and psychological well-being.”9 This collective gut flora, know as the microbiome, can also affect both the heart and mind. 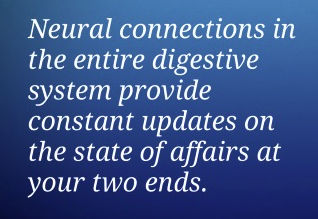 The human gut is often referred to as a second brain, because it can manifest its own independent nervous system which is a network of 100 million neurons embedded in the gut wall. It is so sophisticated that it “continues to function even when its primary neural conduit between it and the brain, the vagus nerve, is severed.” This gut flora can produce “neurochemicals that the brain uses to regulate basic physiological processes such as learning, memory, and mood.”10

So we have a neural connection from the gut to the heart and brain which give extrasensory stimuli “that constantly provide feedback about how hungry we are, whether or not we’re experiencing stress, or if we’ve ingested a disease-causing microbe. This vast web of connections monitors the entire digestive tract from the esophagus to the anus” and “provides constant updates on the state of affairs at your two ends.”11 These signals work as a ‘red signal’ and help us to avoid urgent situations by cutting off the reward systems in our brain.12 These signals, or gut feelings, can be used for both diagnoses of health issues and for intuitive reasons.

Is God Speaking to You?

It has also been found that a belief in God may result from a gut feeling. Study shows that people who generally have a more intuitive process in problem solving tend to believe in God, whereas those who theorize over their choices, don’t. Believing in God could be because our intuitions lead us to see a divine purpose behind ordinary events that don’t have obvious causes. Amitai Shenhav, of Harvard University, says that idea led him “to ask whether the strength of an individual’s beliefs is influenced by how much they trust their natural intuitions, versus stopping to reflect on those first instincts.”13 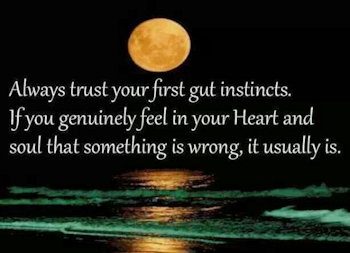 Philippians 2:12-13 states: “Work hard to show the results of your salvation, obeying God with deep reverence and fear. For God is working in you, giving you the desire and the power to do what pleases him.” (NLT) Another translation says it this way: “Be energetic in your life of salvation, reverent and sensitive before God. That energy is God’s energy, an energy deep within you, God himself willing and working at what will give him the most pleasure.” (TM)14

“Most of the time when the Holy Spirit is released in our lives, it comes in quiet, unassuming ways that you aren’t even aware of, or feel. He often nudges us with a gut feeling, a coincidence, or an ‘ah-ha’ moment.”15 If it is God speaking, all we need to do is listen. “Who has put wisdom in the inward parts, or given understanding to the mind.” (Job 38:36, NRSV.) 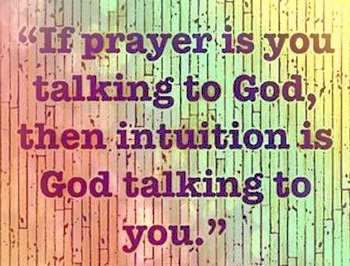 Like suggested at the beginning of this study, most everyone has had a gut feeling that something was wrong at one time or another. That time you were driving and came to a fork in the road and a gut feeling told you to turn in a certain direction. Or, maybe you were confronted with your conscience when making a decision, or felt uneasy when you saw an injustice done. “We tend to take the credit for these gut-level reactions, but we need to consider the real possibility that . . . they came from our Creator.”16 That lump in our stomach – that gut feeling – may be God speaking to us and nudging us along.

It is a reasonable deduction that, if you have gut feelings, you are using a sixth sense that God has given you. If you want to fine-tune a closer relationship with God, start by praying to God to become more comfortable and attuned with those gut feelings you get. Try to be aware of sensing things using all three extrasensory organs in harmony – your brain, heart, and gut. If God is communicating with you, surely you want to listen.

17 thoughts on “Is that Gut Feeling a Message from God?”