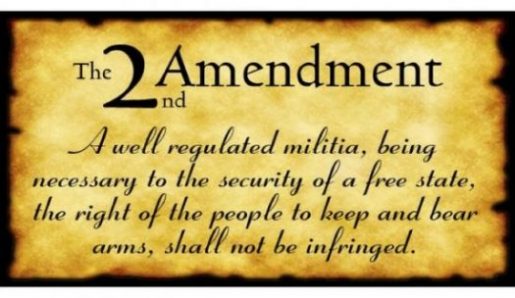 On our front door at home are three decals. One says Christians Unite – Luke 22:36, another indicates our National Rifle Association support, and finally, one that supports the agenda of the Three Percenters1 (see reference for intriguing details, especially for our British readers). Those public displays indicate that the residents of this home believe in the American right to own and carry a defensive weapon and will use such means to defend our country, our property, and our family.

There is biblical support for this attitude, so it is not just a political statement. The holy Bible has plenty to say about owning and using weapons and I’ve even written an article concerning this fact called “Carrying a Concealed Gun: What Would Jesus Say?”2 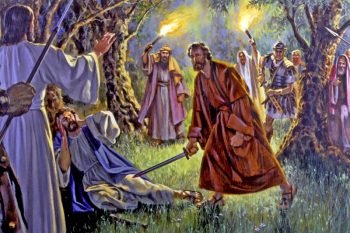 In the New Testament book of Luke, Jesus says, “When a strong man, fully armed, guards his castle, his property is safe.” (Luke 11:21.)3 But the most quoted scripture used, for supporting the carrying of a weapon, is in Luke, chapter 22, which has our Lord saying, before heading to the Mount of Olives, that a weapon is needed. Jesus says “. . . the one who has no sword must sell his cloak and buy one.” (Luke 22:36.) And, after taking an inventory among the disciples, he was told, “Lord, look, here are two swords,” and Jesus replied “it is enough.” (Luke 22:38.) At this point, Jesus and his followers walked to the Mount of Olives where Judas lead a band of men to confront him.

Of course, concerning the scripture quote of Jesus before heading to the Mount of Olives, he had powerful abilities given to him by God, so he obviously didn’t need the weapons for protection, but it was important that Jesus surrender voluntarily, not because of the appearance of fear. Having weapons available demonstrated that they could defend themselves, if they wished to do so. Jesus didn’t want a violent confrontation, because even after Peter drew his sword and cut off a man’s ear, Jesus “. . . touched his ear and healed him.” (Luke 22:51.) Jesus wanted his apostles to be armed only to demonstrate that they had the means for defense, if they so desired.

Examining this story in detail indicates that although Jesus didn’t need armed protection, he demonstrated that weapons might sometimes be necessary for security. Although Jesus healed the man injured during that confrontation, the disciple causing the injury was not held at fault for acting as he did to protect Jesus.

There are many references to being armed for protection and fighting the enemy in the Bible, so scripture does indicate that carrying a weapon is biblically acceptable for protection. Here are a couple of other examples.

So I placed armed guards behind the lowest parts of the wall in the exposed areas. I stationed the people to stand guard by families, armed with swords, spears, and bows. Then as I looked over the situation, I called together the nobles and the rest of the people and said to them, “Don’t be afraid of the enemy! Remember the LORD, who is great and glorious, and fight for your brothers, your sons, your daughters, your wives, and your homes!” (Nehemiah 4:14, NLT.)

You shall give chase to your enemies, and they shall fall before you by the sword. (Leviticus 26:7.)

In the United States we have legal decrees of citizen’s rights amending our Constitution.4 The first 10 amendments are called the Bill of Rights.5 The writers and framers of these documents, our founding fathers, certified rights that, among other things, separated the government and the Church for reasons not understood by most people today, including some citizens of our own country. The whole idea was not to keep the government free of religious influence, but just the opposite — to keep religion free of government influence and control. That said, although there was a range of religious beliefs, 95 percent of the founding fathers were Christian.6 By reading these documents, it is evident that there is considerable Judeo-Christian influence throughout.

In fact, the first amendment to the Constitution guarantees the freedoms of religion, speech, and the press, but the real purpose of this essay concerns the second amendment, which states: A well-regulated militia being necessary to the security of a free state, the right of the people to keep and bear arms shall not be infringed. It is for this reason that many citizens of the United States are so adamant about their right to own guns.

In most cases the anti-gun advocates – those who wish to do away with the Second Amendment – are on the left or liberal side of American politics and associate themselves with socialism and communism. Citizens that are pro-gun believe in upholding the Second Amendment and are on the right or conservative side of politics and hold to the rule of law, minimum government intervention, and capitalism. The majority of U.S. citizens are pro-gun,7 but the minority seems to be the most vocal on this issue. Not all conservative citizens are interested in owning or carrying a weapon, but they like the idea that they can legally do so, if they wish. Many interesting statistics are available about guns in America (see references).8

“Gun control is a term used by liberals when advocating unconstitutional laws designed to disarm people by restricting the lawful purchase, ownership, or carrying of guns, under the guise of ‘public safety’.”9 Most of the people on the left are also against many of our other rights, too, including the freedom of speech, freedom of religion, and freedom of the press that are mentioned above.

It is hard for me to understand why anyone who has the guaranteed rights of liberty and freedom would be begging their government to take those rights away. But leftists are encouraged to push for gun control “because it increases the dependency of voters on government for protection while disarming citizens from any self-defense against violent crime.” So, many U.S. politicians are of no help, because taking away citizens rights give them more power and control over the population and, especially with gun rights, that control is even stronger, because the population would not be able to fight back. Look at what happened in Germany, and elsewhere (see notes for list).10 A 1970s song by Grand Funk Railroad titled “Don’t Let ‘Em Take Your Gun” sums up the thinking of most conservative Americans (see reference for audio link).11

Guns in the hands of law-abiding citizens give a country strength. State regulations vary, but in the state where I live, a citizen can obtain a concealed carry permit after passing local and federal background checks and having their fingerprints on file with the police department. There are plenty of local and regional options to train and practice firearm skills.

Pro-gun communities have less crime and safer neighborhoods. Even the probability of foreign invasion is diminished in pro-gun countries. The popular quoted statement during World War II, that Japan would never invade the United States because they would find a rifle behind every blade of grass, is often, but wrongly, attributed to Isoroku Yamamoto who was a Japanese Marshal Admiral of the Navy. It may have been incorrectly quoted, but the idea was basically true. 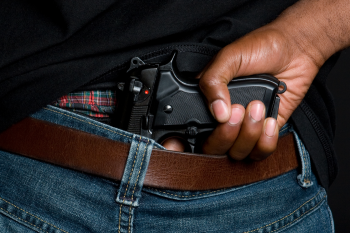 Let’s examine the Second Amendment in detail to understand exactly what it means. It says: A well-regulated militia being necessary to the security of a free state, the right of the people to keep and bear arms shall not be infringed.

“Well-regulated” means well-armed and well-trained. “Militia” is not a standing army like a military branch of government, but ordinary citizens that can be called up at short notice in time of need. “Necessary to the security of a free state” means needed for the protection of the freedoms established for the country’s properties, assets, and society. “Right of the people” means lawfully established specifically for its legal citizens. “Keep” means store in your own home and on your personal property, and “bear” means to carry, hold, or wear it on your body. “Arms” means weapons and/or firearms, including pistols, revolvers, rifles, shotguns, as well as swords, knives, etc. “Shall not be infringed” means a right that cannot be encroached upon; a right that cannot be broken, violated, or breached.12

We Live in an Evil World

It is biblically acceptable to own and/or carry a defensive weapon. We live in a world filled with evil entities. Have you ever thought about the fact that most mass shootings are in, so called, gun-free zones. Such gun-free areas only attract criminals because the bad guys or gals know there will be no one there who can stop them. To be honest, gun-free zones increase crime; I do my best to avoid them. Until our Lord Jesus returns and establishes a true new world order, the righteous, everywhere, need protection from the unrighteous, whether it is an evil individual, or an evil governing authority, or an evil political organization.

Currently, Americans use firearms to defend themselves from criminals over 750,000 times a year in the United States,13 and not too many bad guys or gals will commit crimes if they have no idea of how many people around them are carrying concealed weapons. A law-abiding, background-checked, permit-approved citizen carrying a gun is an excellent deterrent to crime.