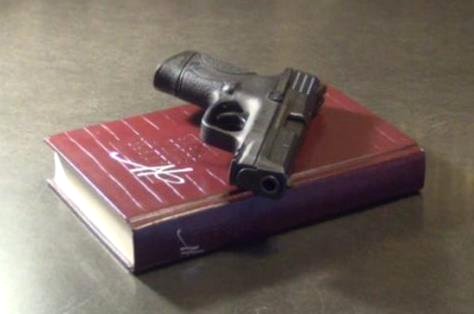 On our front door is a decal that says ‘Christians Unite, Luke 22:36.’ It is our “low key” Christian announcement that the residents of this home believe in the American right to own and carry a defensive weapon.

The Second Amendment to the United States Constitution1 protects the right of citizens to keep and bear arms, so many second amendment adherents reference the book of Luke, from the Bible, as indicative of Jesus’ approval for carrying a defensive weapon (openly or concealed). In Luke, chapter 22, Jesus said to his disciples that if they had no sword, they should buy one and modern day conservative writers use this incident to indicate Jesus would approve of buying and carrying a firearm (Luke 22:36).

The Holy Bible has plenty to say about owning and using weapons and here are just a very few examples. Early in the Bible, in Genesis, it states “When Abram heard that his nephew had been taken captive, he led forth his trained men, born in his house, three hundred eighteen of them, and went in pursuit” (Genesis 14:14).2 And then, in Leviticus, it says “you shall give chase to your enemies, and they shall fall before you by the sword” (Leviticus 26:7). 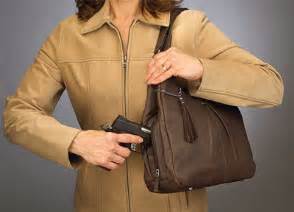 In the New Testament book of Luke, Jesus says “when a strong man, fully armed, guards his castle, his property is safe.” The next verse warns that you should not be “outgunned,” so to speak, because if a stronger armed man comes along, he may take it away from you (Luke 11:21, 22).

There is even an example, in the book of John, of using a weapon to defend our Lord Jesus. When Jesus was betrayed by Judas and was confronted by Roman soldiers and Temple guards in the garden at the Mount of Olives, “then Simon Peter, who had a sword, drew it, struck the high priest’s slave, and cut off his right ear” (John 18:10).

But, the most quoted scripture used, for supporting the carrying of a gun, is in Luke, chapter 22, which has our Lord stating that a weapon is needed. Jesus says “and he who has no sword, let him sell his garment and buy one.” And, after taking an inventory among the disciples, an apostle said, “Lord, look, here are two swords,” and Jesus replied “it is enough” (Luke 22:36, 38, NKJV). At this point, Jesus and his followers walked to the Mount of Olives where Judas lead a band of men to confront him.

So, Is It Biblical?

I agree – this scripture, and others, does indicate that carrying a weapon is biblically acceptable for protection. Now that we have answered the question of what would Jesus say about carrying a weapon, we must further examine the situation in Luke to determine its full meaning. In other words, we must put the events into the proper context and examine them from a realistic perspective to understand the full meaning. So, let us take a look at the rest of the story.

First, Jesus demonstrated in his ministry that, although he had powerful abilities given to him by God, his father, his true nature was to be peaceful. He obviously didn’t need weapons for protection. Even as he was being confronted by the soldiers and guards in the garden, he told Peter “put away your sword . . . don’t you realize that I could ask my Father for thousands of angels to protect us, and he would send them instantly” (Matthew 26:52, 53, NLT). 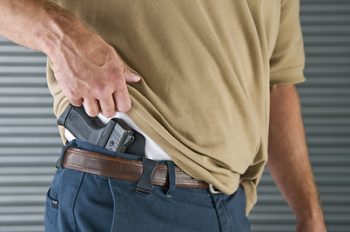 His disciples, at this time, didn’t fully understand what Jesus was doing or what the outcome was to be. But, Jesus knew it was his time to continue with his Father’s divine plan and bring it to its necessary outcome – it was his time to die. Jesus knew in advance he would be betrayed, made a prisoner, and then be crucified.

But, it was important that Jesus surrender voluntarily, not because of fear. When they came after him, he didn’t run, but approached the mob and indicated he was who they were looking for. Jesus’s apostles having weapons with them demonstrated that they could defend themselves, if they wished to do so. But Jesus didn’t want a violent confrontation, because even after Peter drew his sword and cut off a man’s ear, Jesus “touched his ear and healed him” (Luke 22:51). As a scholarly article stated more than a hundred years ago, “we find our Lord fully submitting himself to capture.”3 Jesus wanted his apostles to be armed only to demonstrate that they had the means for defense, if they so desired.

We learn a few facts from this lesson. First, yes it is acceptable to carry a defensive weapon. We live in a world filled with evil entities. The righteous, everywhere, needs protection from the unrighteous, whether it is an evil individual or an evil governing authority or political organization. Another is that we have a better understanding of Jesus’ reasoning concerning his father’s divine plan for the redemption of humankind. It was planned for Jesus to die, because only then could a possible human salvation take place.4 And finally, if you do decide to carry a weapon, be smart and don’t use it in haste, as Simon Peter did. After all, unlike Jesus, in the incident stated above, we don’t have an instant means of reversing our actions.

1. 2nd Amendment to the U.S. Constitution: “A well regulated militia, being necessary to the security of a free state, the right of the people to keep and bear arms, shall not be infringed.”

2. Unless otherwise noted, scripture quotations are from the New Revised Standard Version Bible (NRSV), copyright 1989 the Division of Christian Education of the National Council of the Churches of Christ in the United States of America. Used by permission. All rights reserved.

15 thoughts on “Carrying a Concealed Gun: What Would Jesus Say?”