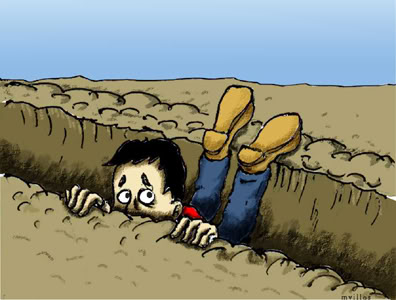 My wife, Mary, tells me (many times) that I’m stuck in a rut; I guess that may be true in some cases, but I don’t think of it as a bad thing. I’m also a creature of habit (she says), because my life is based on many routines every day: making coffee at the same time, reading the newspaper at the same time, taking out the garbage at the same time – you get the idea. And I can’t multitask (she says). My mind is always deeply focused on some project or other distraction and if I didn’t live by repeating daily routines, I’d most likely forget to do a lot of necessary stuff. Another fault (she says) is that I never want to get out of the office.

Now, after thinking about it, I guess she is right about all of the above. She is always keeping an eye on me and, when she deems it necessary, she will coerce me to go shopping, take a road trip, or visit some place or someone. She helps by guiding me along on a much better and balanced path through life, so she is always thinking about what is best for me, even when I don’t – she helps to get me out of my rut, so to speak. We both believe, as the bible says, a marriage joins two people into one and they compliment each other. Mary is nearly perfect (I say), so I don’t have to put as much effort into guiding her along, but I will if it is necessary.

When performing wedding ceremonies, I used to quote what C. S. Lewis said about ‘oneness’ in marriage. A husband and wife, Lewis said, are to be regarded as a single organism, because that is what the words ‘one flesh’ would be in modern English. Just as a violin and a bow are considered one musical instrument, God tells us that the two halves of a marriage, the male and the female, were made to be combined together into one operating unit.1 My wife looks after me, and I hope I do well in looking after her, too. I guess you could say that we have each other’s back.

What is a Rut? 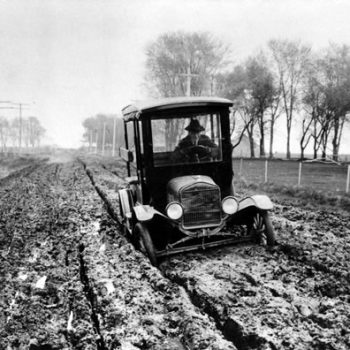 Now, about that rut that I’m in. Everyone gets into one, now and then, but what, exactly, is a rut? Common thought about the term “stuck in a rut” is that it comes from the early 1800s when wagon wheels had worn a groove in a dirt path. The wagon could, literally, get stuck in the rut and be difficult to get out, but I’ve found reference to wagon ruts dating back to 2500 B.C.

Even estimates of chariot and wagon sizes, during that period, were measured by the width of the ruts created.2 Ruts were not always a problem, either, but could be used to advantage. Ancient Assyrians, Babylonians, Persians and Greeks constructed roads with artificial wheel-ruts deliberately cut into rock. The ruts were spaced apart at the same distance as the wheel span of an ordinary carriage, and therefore formed grooves that guided the carriages automatically. Such ancient stone rut-cut roads connected major cities and sacred sites.3

Applied to one’s life in a negative way, being stuck in a rut would indicate seemingly being stuck in some sort of unchanging pattern. Whether personal behavior or work related, it indicates being stuck in a trivial, boring, and generally dreadful position. Being stuck in some ruts can become a trap, sapping your energy, your time, and even taking your life. Worst case scenarios would be alcoholism or drugs. Of course, there is also pornography, which can wreck social relationships and marital fidelity. But the more common forms of being in a rut, develop from mental depression – dissatisfaction with your health, job, friends, or home life. Or maybe, it is because of a spiritual problem.

Do you lack getting excited about, or finding a purpose in, anything? Do you stay in your present situation because you think there is nothing else out there, or dream about the past, or of some alternate reality? Or is it fear and anxiety that restrain you? These are things that shout for attention and the only solution is finding a way to get out of your rut. This reminds me of some lyrics from a song called “Stuck in a Rut,” by a Welsh rock band.

What you’ve got is long gone, draw a line in the sand.
Your poker face is shot, I can see through your hand,
Stop lying to yourself, gotta make [a] new plan.
Time don’t wait for no man.4

Escape the Rut with Faith and Prayer

There are several things you can do to get out of a rut; stop listening to others who think they know what you need, and stop waiting for that one ideal circumstance you think you need to make your move. Identify what you want, believe in yourself, and do it. And, most important, ask God for help – pray for forgiveness and guidance and have faith that he will answer your prayers. Here are a few bible verses that you can keep in mind, while lifting your life out of the rut.

1) “No one who conceals transgressions will prosper, but one who confesses and forsakes them will obtain mercy” (Proverbs 28:13).5
2) “If we ask anything according to his will, he hears us. And if we know that he hears us in whatever we ask, we know that we have obtained the requests made of him” (1 John 5:14–15).
3) “Humble yourselves therefore under the mighty hand of God, so that he may exalt you in due time. Cast all your anxiety on him, because he cares for you. Discipline yourselves, keep alert. Like a roaring lion your adversary the devil prowls around, looking for someone to devour” (1 Peter 5:6–8).

We all slip into a rut, occasionally, so it is important to prepare a strategy that works for us, and that should include prayer.

4. Selected lyrics from “Stuck in a Rut,” by Stereophonics, (album: Keep Calm and Carry On, Mercury, 2009), https://en.wikipedia.org/wiki/Keep_Calm_and_Carry_On_(album)

5. Unless otherwise noted, scripture quotations are from the New Revised Standard Version Bible (NRSV), ©1989 the Division of Christian Education of the National Council of the Churches of Christ in the United States of America. Used by permission. All rights reserved.

4 thoughts on “Stuck in a Rut”