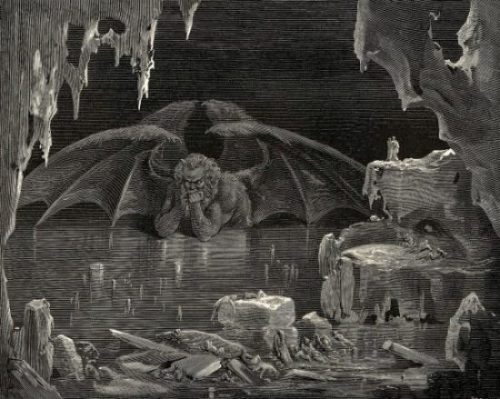 Most Christians believe that these three names are interchangeable for identifying the biggest and most powerful ‘bad guy’ of the Bible. Just what are the dictionary definitions for these words: Satan, Devil, Lucifer?

According to Merriam-Webster, Satan is Greek and the Hebrew is śā[t]ān, which means adversary. It is the angel in Jewish belief that is commanded by God to tempt humans to sin and carry out God’s punishment, and the Christian belief is that of a rebellious angel who is the adversary for God and lord of evil. Now, the Devil is from the Greek diabolos and literally means slanderer. It is the personal supreme spirit of evil and represented as the tempter of mankind, leader of all apostate angels, and ruler of hell. Lucifer, on the other hand, is from Latin (lux=light, fer=ferous [more]) meaning light-bearing, and is used as a name of the Devil, as well as the name of the planet Venus when appearing as the morning star.1 It would seem that these three words could be interchangeable, when used for “the evil one” in the Bible. But is all of this really true, from a biblical perspective?

In Genesis is the story of the fall of man caused by Satan, but Ezekiel gives a detailed account of Satan’s own fall. The full account is given in Ezekiel 28:11–26, but the following is a brief description. In this “King of Tyre” prophecy, Ezekiel was describing Satan. He says that Satan was a guardian angel who had unimpeded access to God’s domain. He was adorned with nine precious gemstones, which symbolized his great beauty and high position. He was completely blameless but, because of self-generated pride, wickedness infected his perfect nature and this sin led to his fall and judgement.2 Now, Satan is the head of operations for rebellion and evil; he is chief of all the fallen angels, which are active rebels against God.3

Throughout the Bible we learn Satan has many names. He is called the adversary, the dragon, that old serpent, and the god of this world, among others. In the New Testament, Satan is used interchangeably with Diabolos, or “the devil” at least thirty times or more, depending upon which version is used. You will also find that he is Beelzebub the prince of demons, as well as many more reference comparisons (e.g. power of death, roaring lion).4 So Satan and the Devil are, indeed, one and the same, but what about Lucifer — who is he?

How did Satan, the Devil, get the name Lucifer? To understand, we need to go to the Old Testament book of Isaiah. At Isaiah 14:12 (NKJV), it says: “How you are fallen from heaven, O Lucifer, son of the morning! How you are cut down to the ground, You who weakened the nations!”

Besides being in the modern New King James Version (NKJV) and the older King James Version (KJV), only one other instance of using the label “Lucifer” is found and it is in The Message,5 a modern American-styled English version, which states in Revelation: “But you walked away from your first love–why? What’s going on with you, anyway? Do you have any idea how far you’ve fallen? A Lucifer fall!” (Revelation 2:5, The Message).6 That is it – only three references to Lucifer from all generally available Bibles. No other current version or translation mentions Lucifer. Why is this? How did Lucifer come to be mentioned in the first place?

From the definition in the beginning of this article, we know that ‘Lucifer’ is a Latin translation. “The term ‘Lucifer’ was taken by the King James Version translators from Jerome’s Latin Vulgate (383-405 A.D.) edition of the Bible. The Hebrew word is ‘heylel’ which suggests the idea of ‘shining,’ or ‘bearing light.’ Jerome assumed the word was the name of the morning star, hence, he rendered it by the Latin title [of] Lucifer.”7 Unlike Jerome, who correctly assumed the term was the name of the morning star (the planet Venus), later translators believed it was the name of the Devil.

Actually, the Isaiah description was a reference to “the king of Babylon as the morning star to depict the once-shining-but-now-dimmed, once-lofty-but-now-diminished, status of the (soon to be former) ruler.”8 Babylon’s fall was great and the description of the king falling along with it, fit the description of the bright morning star dimming as the light of day increased. “As the morning star is not the sun which distinguishes day from night, the king of Babylon is not God! However, in its drive to rule the world, Babylon’s pride was unlimited and it acted as God on earth.”9

Over time, the idea developed that this was a description of Satan’s fall, although there is no evidence to support that idea. Others substantiate this misconception, too. “The fact is . . . there is absolutely no evidence, whatever, that Isaiah 14 contains any reference to Satan . . . . [and] the context clearly identifies the narrative as a ‘parable against the king of Babylon’ ([Isaiah] 14:4). The death of that oppressive character is vividly described.”10

An excellent Bible commentary states “the text speaks nothing at all concerning Satan nor his fall, nor the occasion of that fall, which many divines have, with great confidence, deduced from this text. Oh, how necessary it is to understand the literal meaning of Scripture, that preposterous comments may be prevented.”11 And writer and publisher Gustav Davidson, who wrote the classic text A Dictionary of Angels, stated that Lucifer is “erroneously equated with the fallen angel (Satan) due to a misreading of Isaiah 14:12.”12

So the idea that Satan and Lucifer were the same came later as time went on. The Lucifer-Satan theory, “nevertheless, became popular enough to be repeated still today. In fact, it even seems to have inspired Mohamed’s story of ‘the fall of Satan’ in sura 7 of the Quran.”13 And besides becoming a byword for Satan or the Devil in the church, Lucifer was also used in popular literature as in Dante Alighieri’s Inferno, Joost van den Vondel’s Lucifer, and John Milton’s Paradise Lost.14 Currently, and in the recent past, television shows and motion pictures give many more falsehoods about the Lucifer-Satan relationship.

We can therefore conclude that the names of Satan and the Devil are interchangeable, but the name or label of Lucifer had nothing to do with this fallen evil angel in the Bible. Of course, we are only talking about a technicality in usage, because when someone speaks of Lucifer, we know exactly who they are talking about. So even though that name became known by way of biblical error, Lucifer has entered our common language and is now considered an equivalent label for Satan the Devil.

→ Leave comments at the end, after References & Notes.
OBS respects your privacy and is compliant with the European Union GDPR regulation. Click here to read.

5. Author’s note #1: It may be that the single author of this Bible translation was trying to be poetic, just as the verse is in Isaiah 14, when referring to the gradual dimming of the morning star.
Author’s note #2: Wikipedia gives more information about The Message. It is an idiomatic translation of the original languages of the Bible. It is a structural form peculiar to the contemporary slang from the United States, rather than a more neutral International English, and it falls on the extreme dynamic end of the ‘dynamic and formal equivalence spectrum.’
“The Message (Bible),” (Wikipedia, Wikimedia Foundation, Inc., 10 May 2018), https://en.wikipedia.org/wiki/The_Message_(Bible)

7. Jackson, Wayne, “Who Is Lucifer?” (Christian Courier, retrieved 29 May 2018), https://www.christiancourier.com/articles/158-who-is-lucifer

OBS respects your privacy and is compliant with the European Union GDPR regulation. Click here to read.

21 thoughts on “Satan, the Devil, and Lucifer: are they one and the same?”