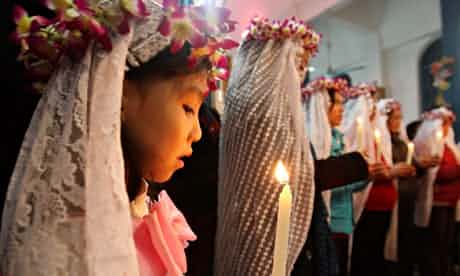 Here we go again! Recently I explained how Jehovah’s Witnesses in Russia were being persecuted,1 and now we hear that Christians in general are being persecuted in China. This information comes from an article in The Christian Journal, which stated that on 17 July 2018 authorities demolished another Christian Church because they wanted the land for other purposes.

Pastors involved issued a joint statement indicating that the country’s constitution guarantees they have the right to religious freedom, but Communist authorities are attempting to silence them. They indicate that there have been arrests of church leaders, disruption of services, and destruction of churches. One pastor indicated his belief that Chinese police officers are monitoring their phones.2 An International Christian Concern manager, Gina Goh, said: “The latest crackdown against house churches in China is reflective of President Xi’s disregard for religious freedom. China is experiencing the worst Christian persecution since Mao Zedong’s Cultural Revolution.”3

This isn’t a new persecution against Christians in China. An article in 2013 appeared in Christianity Today stating “the number of incidents of persecution increased in 2012 from the previous years, including a number of arrest, sentencing to labor camps, short term detentions, rape and torture in police custody, destruction and confiscation of property, beatings, fines, the loss of jobs or business licenses, and police intimidation.”4

Kody Kness, the vice president of China Aid, is quoted in an article from 2016 stating that there is “…unprecedented persecution against the Church, where church leaders are going to prison, are being sent to mental institutions, are being beaten and tortured and where crosses have been forcibly removed from now over 1,800 churches since 2014. There are policies that are coming out that come directly from the central government to basically persecute the Christian Church in China.”5

And in United Kingdom…

And then there is the United Kingdom where there were no Syrian Christians admitted as refugees, but over one thousand Muslims were welcomed during the first quarter of 2018. Even the biased United Nations recommended a few Christian refugees, but they were all rejected. Is this Britain’s future, not wanting to save Christians?6 Maybe someone closer to this activity in China or UK can add more information in the comment section, so others around the world can get a better idea of what is going on in those countries. Let us pray for the persecution of Christians all around the world.

6 thoughts on “In the News: Christians in China are Facing Persecution”