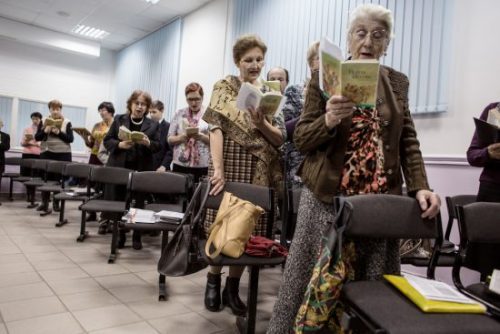 In the city of Ufa, Russia, 22 Jehovah’s Witness members have recently been jailed for religious extremism and are at risk of up to 10 years in jail, according to Human Rights Watch.1 In 2017 the Russian Supreme Court targeted the JW religion and ordered their dissolution in Russia, because they seem as a threat, as they are organized, independent, and may seek power. The government is now taking physical action. The Yahoo article stated that police threatened the JWs and, in some cases, held guns to people’s heads.2

Now, I am not a Jehovah Witness and do not agree with all their doctrine, but this seems like a blatant attack on a Christian denomination, possibly because it is a rival to the Russian Orthodox Church. Bishop Hilarion Alfeyev said that JWs “destroy people’s minds and destroy families.” A Human Rights Watch Deputy Director, Rachel Denber, stated “authorities should stop this religious persecution of its worshipers now.”3

If this is an attack orchestrated by the Russian Orthodox Church, it is motivated by a political move within the church organization which is aligned more to the world than to Christ. It matters not what denomination or sect is persecuted, we all suffer when one church or another is attacked. Jesus said this:

If you belonged to the world, the world would love you as its own. Because you do not belong to the world, but I have chosen you out of the world—therefore the world hates you. (John 15:19, NRSV)

What do you think? Is this an attach on the Church? Is it an attack on the denomination? Is it one denomination against another? Is this an attach by Satan to cause chaos? Or, if you have a more insightful idea, let’s hear it. Sometimes news reports don’t give the full story and journalists capitalize on sensation. Maybe someone in Russia can give their opinion.

3 thoughts on “Attack on Jehovah’s Witnesses in Russia”