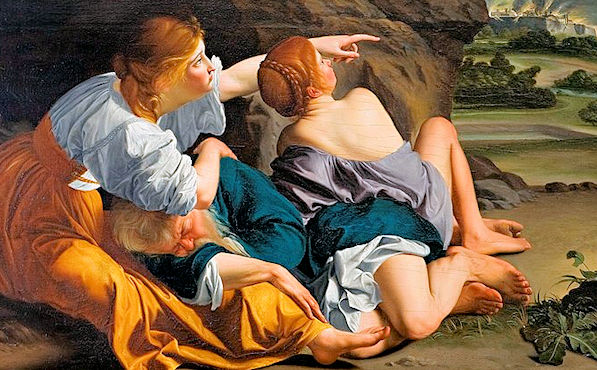 You can read about Lot and his family, along with the destruction of the kingdoms of Sodom and Gomorrah (c. 2000 BC) in Genesis, chapter 19. Our website already has a deep study of this disastrous event (see References & Notes for a link),1 but this present discourse analyses only the rape of Lot by two of his daughters.

With the help of angels, Lot and his two daughters and his wife escaped the pending destruction of Sodom and quickly traveled toward the mountains near the city of Zoar. Along the way, Lot’s wife was turned into a pillar of salt, because she disobeyed the specific order not to look back. And sometime after Lot and his daughters arrived at a cave used for shelter, the rape occurred as follows.

Listen to this article: Click the > button to start audio – click again to pause – click the speaker icon to mute. Adjust volume on the right side.

And the firstborn said to the younger, “Our father is old, and there is not a man on earth to come in to us after the manner of all the world. Come, let us make our father drink wine, and we will lie with him, so that we may preserve offspring through our father.”

So they made their father drink wine that night; and the firstborn went in, and lay with her father; he did not know when she lay down or when she rose. On the next day, the firstborn said to the younger, “Look, I lay last night with my father; let us make him drink wine tonight also; then you go in and lie with him, so that we may preserve offspring through our father.”

So they made their father drink wine that night also; and the younger rose, and lay with him; and he did not know when she lay down or when she rose. Thus both the daughters of Lot became pregnant by their father,” (Genesis 19:31-36, NRSV).2

Who was at fault — Lot or his daughters? 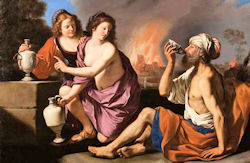 One literary source presents different Rabbinic views concerning the incest from the perspective of Lot. Some say he actually wanted to dwell in Sodom to partake of the promiscuous behavior of its citizens. After all, he was earlier willing to share his daughters with the townspeople. So, the acts of daughterly incest may have been “Lot’s punishment for his unseemly behavior.” The idea being that Lot lived in Sodom to hide his own evil thoughts and actions.3

Another idea supposed that Lot “secretly lusted after his daughters” and although intoxicated when the elder sister lay with him, he was sober when she arose and “he did not refrain the second night with his younger daughter.” Regardless of what actually happened, the Rabbis’ consensus is that more blame is placed upon Lot, because there was at least some purity of the daughters’ intentions.4

And “according to Jewish tradition, Lot’s daughters believed that the entire world had been destroyed, and that they were the only survivors. They therefore resorted to incest in order to preserve the human race.”5 This was the opinion of early church fathers, too.6 This is evident from the elder daughter’s comment, “there is not a man on earth to come in to us after the manner of all the world” (Genesis 19:31).

Also, to some extent, there must have been frightening thoughts of the daughters growing old without children to take care of them. But, I think there may be a further consideration to ponder and it helps explain why Lot was willing to offer his virgin daughters to angry Sodomites while still living in the big city. The Bible mentions four unnamed daughters of Lot — two were married and stayed in the city, and the two virgins who left with Lot — but the noncanonical Book of Jasher mentions a fifth daughter named Paltith. 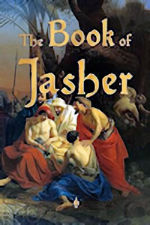 While not a part of the standard Bible, Jasher is mentioned in Joshua (Joshua 10:13) and 2 Samuel (2 Samuel 1:18), as well as a part of the Greek Septuagint and Latin Vulgate.7 Anyway, this fifth daughter, Paltith, was burned to death by the Sodomites for not obeying social norms concerning foreigners that were established by the city leaders.8 Could Lot have been trying to appease the angry townspeople to avoid another death?

Whatever the reason, who was really at fault for this incestic activity? A number of commentators do describe the actions of Lot’s daughters as actual rape upon their father. One academic, a political science professor at Columbia University ‘s School of International and Public Affairs, wrote that Lot’s daughters were the “initiators and perpetrators of the incestuous ‘rape’.”9 Another, a professor of Hebrew and Comparative Literature at the University of California at Berkeley, agreed and wrote that when the oldest daughter says “let us lie with him,” the meaning of the Hebrew verb in this context “seems close to ‘rape’.”10

While Jewish scholars can find the fault with Lot, even though the Old Testament scripture categorically states Lot “did not know when she lay down or when she rose,” they also refuse to consider New Testament scripture which establishes him being a righteous man. For God “. . . rescued Lot, a righteous man greatly distressed by the licentiousness of the lawless” (2 Peter 2:7).

And as mentioned in my earlier article11 on this subject, before we pass any moral judgement upon the daughters, it should be noted that at that time there were no actual scriptural ordinances against incest; close marriages were quite common. “According to the sequence of events described in the Bible itself, Lot and his daughters were not subject to any formal law against incest, since the legal codes found in Exodus, Leviticus, Numbers, and Deuteronomy were not handed down until God revealed them to Moses several centuries later.”12

Even the first-century Jewish historian, Flavius Josephus, in his work The Antiquities of the Jews, defends Lot’s daughters for their deeds. He states that they thought all had perished, so had intercourse with their father, taking care not to be discovered, so as to prevent extinction of the clan.13

But, whatever background and ancient reasons led to the deed, Lot’s daughters knew exactly what they were doing and accomplished their intended mission. The result from their impregnation was two sons. The eldest daughter called her son Moab, who was the ancestor of the Moabites (Genesis 19:37); the younger daughter called her son Benamy (Genesis 19:38), who was the ancestor of the Amonites.14 From that point, we read nothing more about Lot and his life. 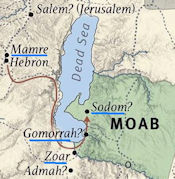 Many believe he had chosen to live his life amongst sinners and, because of his choices, died a penniless, drunk, old man living in a cave. “In some ways, the incestuous act of the daughters sleeping with their father, can be seen as a ‘rebirth’ of Sodom and Gomorrah.” For instance, offspring raised by alcoholics may also become alcoholics, and children raised by promiscuous parents many times pick up the same habits. “It stands to reason that children raised in an immoral society such as Sodom, will become perverse themselves. Where we live and whom we associate with can have a profound impact on whom we grow up to become.”15

Surely, regardless of the justification they used, the daughters’ acts of incest demonstrated Sodom’s influence upon them.16 And just as in their time, our current world is plunging into a moral breakdown with all the progressive and socialist governments propagating and encouraging evil practices that attract sin and hate. We should all heed the words in the apostle John’s first epistle.

The music video relative to this article is by Aida, a Gospel singer in Africa. I wanted to find something to reflect upon the above scripture from 1 John 2:15-17 and found this one recorded at a student university camp in Mampong, Ghana. She sings ‘Do Not Love the World My Brother’. Selected lyrics are below and a link to the music video is in References & Notes.17