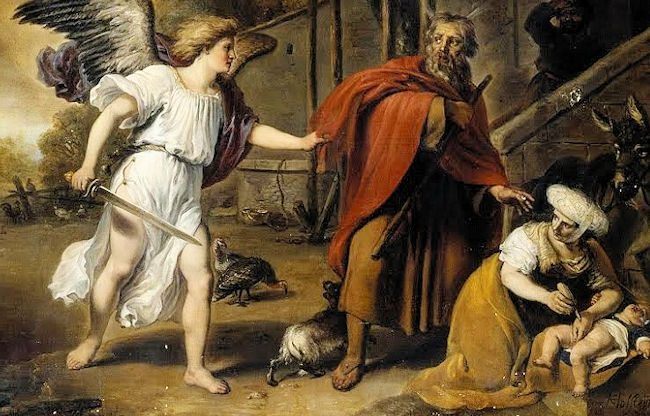 As a younger man, Moses left Egypt to avoid being arrested for killing an Egyptian overseer of the Hebrew slaves. Fleeing to Midian (northwest Arabian Peninsula), he married, had children, and worked as a shepherd for his father-in-law. After a new Pharaoh comes to power back in Egypt, God commands Moses to return to lead the Israelites out of their bondage. See Exodus 2:11 — 4:31 for the Bible story.

Our study will be but three verses in chapter four of the Book of Exodus. This is after God instructs Moses on his upcoming job and his journey toward Egypt has already begun. Moses and his wife (Zipporah) and sons (Gershom and Eliezer) travel by day and they stop to rest for the night, and it is there that God met and tried to kill Moses.

On the way, at a place where they spent the night, the LORD met him and tried to kill him. But Zipporah took a flint and cut off her son’s foreskin, and touched Moses’ feet with it, and said, “Truly you are a bridegroom of blood to me!” So he let him alone. It was then she said, “A bridegroom of blood by circumcision,” (Exodus 4:24-26, NRSV).1

What was that all about? These verses, concerning a circumcision,2 are odd and confusing, and some commentators believe they are out of place. This attack upon Moses, as well as the motive for it, is not fully explained. Our study is to give some sense to this short mysterious section of text and present a few possible reasons for its inclusion, so you can make up your mind about which seems the most logical answer.

Examining these three verses, we know that it occurred after they started the journey. It is like, as if Moses was forgetting something or he was being bullheaded by not complying with something important. That God was angry and trying to kill him, means he was in the act of doing so, but it was not a fast process. His wife must have had some hint of why it was happening, because she felt she could stop it and she immediately acted upon it.

Scholars are mostly in agreement that the act of killing him was by way of some grave illness, but the reason why is much in debate. Since the days of Abraham, God required his people to circumcise their sons (Genesis 17:10-14), and many academics believe that Moses had failed to meet God’s requirement with the second son (Eliezer). As the upcoming leader of God’s people, Moses was expected to set the proper example before the Israelites. Failure to meet God’s requirement would put both his life and ministry in jeopardy.3

Then again, as some researchers suggest, God may have sought to kill not Moses, but Moses’s son because he had not been marked as a member of Israel through circumcision. The scripture, after all, did not actually name Moses as who was to be killed; all it states is “tried to kill him,” (Exodus 4:24b). Although some Bible versions’ substitute Moses’ name, the actual Hebrew wording states ‘him’. Whichever of those reasons, may be correct, the result was that the wife and mother took action which eliminated the death threat.

In an act which seems to indicate Zipporah’s displeasure (in some Bible versions), she circumcises her son and touches Moses with the removed foreskin. Why do that? Well, to answer that question, we need a little more background information. 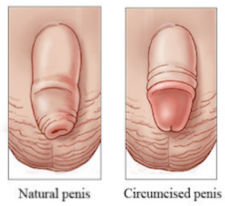 Since Moses had been adopted by Egyptians after birth, he probably was circumcised by an Egyptian ceremony. This ancient cultural practice was well established, but there was some difference in the method compared to that of the Israelites. The custom in Egypt was associated with coming into manhood at about fourteen years of age and the entire foreskin was not removed. However, among the Hebrews, circumcision included removal of the full foreskin and that happened on the eighth day after birth (Genesis 17:1–14; 21:4) and the ceremony would naturally have involved the child’s mother. Every Israelite wife and mother would have, thus, been reminded of the covenant between God and Israel, through the circumcision of her sons.4

Because Moses may not have been ‘properly’ circumcised (by Hebrew custom) before marriage, Zipporah may have achieved two things by circumcising her son. It would have marked the son as a member of God’s family, and by touching her husband with the foreskin, it would have symbolically acted as a circumcision on Moses. Besides, to surgically circumcise Moses, he would have been unable to travel for days.5

What did it mean to touch his feet?

The scripture says Zipporah touched his feet, with the foreskin. Why his feet? This is a little easier to explain — the word ‘feet’ is a euphemism for Moses’ genitals. A euphemism is an inoffensive expression which is substituted for one that is considered offensive,6 and it is a common technique used in the Hebrew language.

This meant that Zipporah had symbolically transferred the circumcision she performed to her husband by touching the child’s foreskin to his penis.“This ritual of circumcision by proxy made Moses her ‘bridegroom of blood’,” which satisfied God and, therefore, saved Moses’ life.7

Euphemisms are used all throughout the Old Testament. A couple of examples are when a husband and wife had sexual relations, it is said that they “lay together” or they “knew” each other. And in the Book of Ruth, it says, “When he lies down, observe the place where he lies; then, go and uncover his feet and lie down; and he will tell you what to do,” (Ruth 3:4).8

Another example is when Abraham said to his servant, “Put your hand under my thigh and I will make you swear by the LORD, the God of heaven and earth, that you will not get a wife for my son from the daughters of the Canaanites, among whom I live. . . .” (Genesis 24:2-3). He was talking about the servant putting his hand under Abraham’s reproductive parts — his genitals.

During the patriarchal period, oaths were taken by placing a hand under the reproductive organ, but generally recorded in the Bible as ‘thigh’ instead of testicles, penis, or genitals. Interestingly, the modern English terms ‘testify’ and ‘testimony’ originated from this use. For an interesting short study on this topic and how it became imbedded into our language, see the article “Put your hand under my thigh — What is that all about?” which is listed in References & Notes at the end of this article.9

Male circumcision has a special meaning in the Old Testament. It is mentioned in Genesis, chapter 17, when God repeats his covenant of solidarity with Abraham and his descendants and explains his demands.

Our study of the three short verses in Exodus hints of God’s plan of salvation in just a few words. Zipporah calls Moses a bridegroom because she had been compelled to acquire and purchase him anew as a husband by shedding the blood of her son, hence a bridegroom of blood. “She received Moses back from the dead, as it were, and remarried him again.” This is symbolic of humankind being dead to God, but then he provides redemption through a blood sacrifice and brings humankind back to himself. The bride (the church) is restored to her bridegroom (Jesus) by shedding of blood.10

There is a detailed study on this subject of circumcision from ancient to modern times in an article titled “Circumcision in the Bible: What was it really all about? – Why on the 8th day?” It is listed in References & Notes.11

Circumcision was important to God, at least until Christ was crucified. This Old Testament procedure showed that the flesh must be physically sacrificed, whereas in this current age, the sacrifice of the flesh is spiritual. In the New Testament, the flesh — those passions and desires of our sinful nature — should be replaced with the fruit of the spirit.

Circumcision was only one of the hundreds of laws that God demanded be obeyed. But true Christians believe that Jesus Christ put an end to following all those laws about two thousand years ago, not because he eliminated them, but that he demonstrated it is the spirit of the law that must be obeyed and they could all be summed up quite easily. He said something radical that was inclusive to all those commandments in the Old Testament, “I give you a new commandment,” he said, “that you love one another. Just as I have loved you, you also should love one another,” (John 13:34). Jesus changed the law with a single word: love.12

To wrap up this article and end with a bit of humor, we have a 40-second video clip from an old Seinfeld television program from the 1990s, concerning the subject of circumcision. Jerry (Jerry Seinfeld) explains to Elaine (Julia Louis-Dreyfus) what job a mohel13 performs and Elaine gives her opinion about uncircumcised men. See References & Notes for the link.14

→ Leave comments at the end, after ‘References & Notes’.
Your email address will NOT be published. You can see our basic rules for comments by clicking “The Fine Print” on the top menu bar.

4 thoughts on “Why did God Try to Kill Moses? — Zipporah Comes to the Rescue”