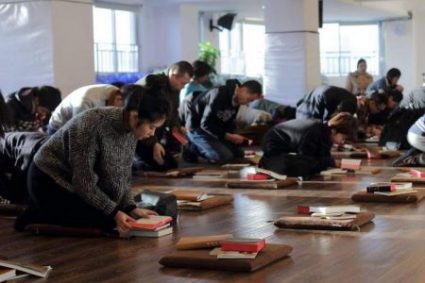 Chinese officials snatched about 100 worshipers of the Early Rain Covenant Church in districts of Chengdu, the provincial capital of Sichuan. The activity was to close down one of the country’s prominent Protestant “house churches.” The coordinated raids began on the evening of 9 December 2018 according to South China Morning Post.1

U. S. China Aid spokesman, Bob Fu, said “the crackdown represented a major escalation of religious persecution in China.” Fu indicated that increases of Christian detention have increased dramatically over the last year.

China’s harassment of Early Rain Covenant Church was denounced by the United States State Department in May, when the church was planning a memorial service for victims of an earthquake.2

The church said on its Facebook page more church members were detained following further raids on Monday and Tuesday morning, and accused police of physically assaulting some worshipers and stomping on their feet.3

→ Leave comments at the end, after References & Notes.
OBS respects your privacy and is also compliant with the European Union GDPR regulation.