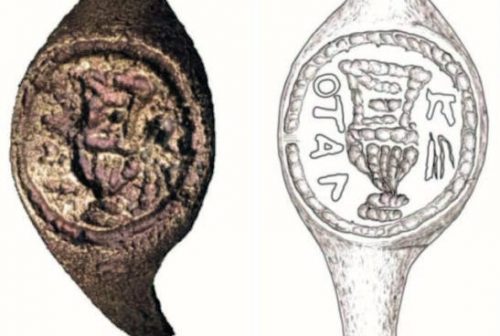 An article in a recent issue of Israel Exploration Journal indicates that a ring has been found which bares the inscription of Pontius Pilate. This information has been released by RT News Network.1

The bronze ring was originally found about 50 years ago during an archaeological dig at a Herodian fortress site built by King Herod of Judea near Bethlehem, but Pilate’s name was not deciphered until recently when the artifact was being studied in depth. The ring is a “stamping ring” used to sign Pilate’s name on official documents.

“Pilate, a Roman prefect who ruled the Roman province of Judaea from circa 26–36 CE, is mentioned in several accounts in the New Testament, as having ordered the trial and crucifixion of Yeshua, a Second Temple-period radical preacher from the Galilee, more commonly known as Jesus.”2

“After a thorough cleansing, the ring was photographed using a special camera at the Israel Antiquities Authority Labs, revealing the crucial name. The stamping ring bears a picture of a wine vessel surrounded by Greek writing that translated into ‘Pilatus.’” Pilatus was the name of Pontius Pilate, who in the New Testament, was the man who ordered Jesus’ crucifixion.3

The research into the ring was lead by Shua Amurai-Stark and Malcha Hershkovitz, scholars from Kaye Academic College, after it (and hundreds of other finds) was being properly processed and examined. The original dig was led by Gideon Forster of the Hebrew University of Jerusalem4 in 1968-1969.

Ark of the Covenant Found?

In another news report, Bible Archaeology Search & Exploration Institute (BASE) claims there is strong evidence that the Old Testament’s Ark of the Covenant is in Ethiopia. The organization’s claim came after an investigative expedition to Ethiopia was made.

This relic is a chest, made of wood and covered in gold, containing the two stone tablets of the Ten Commandments, along with other items. Some “archaeologists have claimed there is ‘compelling interest’ that the Ark was in fact taken to Africa by ancient Jews as it was sailed down the Nile.” Ethiopia has long claimed to be the current holders of the relic and have it under guard at the Church of Our Lady Mary of Zion in Axum, Tigray.

1 thought on “In the News: Ancient Ring of Pontius Pilate Found”