Jesus’ disciples ask him, in Matthew, chapter 24, what are the signs of the end of the age and of his second coming. After explaining those things, our Lord proceeds, in chapter 25, by presenting three great parables about the last judgement, one of which is an allegory about ten virgins or bridesmaids. This is the parable that is the focus of our study.

This story follows the normal Jewish cultural outline of marriage procedures at that time. The bridegroom represents the Messiah (John 3:28-30), of course, and the kingdom of heaven is the future dominion of his rule. Those ten maidens carrying oil lamps represent two different groups of the church.2 One group of five was wise by also carrying flasks (vessels) with extra oil, whereas the other group was foolish by not acquiring extra oil for their lamps. But there is more to this scripture than is evident at first glance. This parable is a symbolic representation, so what do the lamp and oil represent? 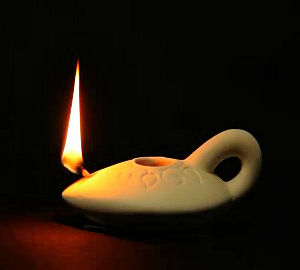 Proverbs 20:27 says that “the human spirit is the lamp of the LORD,” so the lamp displays our deepest feelings and our true thoughts and emotions. Christians exhibit this lamp, and its flame is present and visible to others.3

The oil typically represents the anointing of the Holy Spirit. Christian believers who live by the spirit (the wise ones) will never run out of the oil that anoints and empowers them. However, believers who live by the flesh (the foolish ones) can function in their own strength in good times and thus may be indistinguishable from spirit-filled believers, but when darkness comes they tend to lose their light and the flame flickers away.4

(A fine study explaining living by the spirit or by the flesh has been published by The Outlaw Bible Student. The title is “Fruit of the Spirit – Works of the Flesh” and it is listed in References & Notes at the end of this article.)5

The five wise virgins represent true disciples of Christ in every way. But the foolish virgins represent those who profess to hold the Messianic hope, but have not dedicated themselves to a true Christian lifestyle, therefore have not had the Holy Spirit poured upon them.6

The bridegroom is delayed, representing the period between Jesus’ first and second coming. While waiting, all the virgins fall asleep; this is reasonable and there is no indication in the scripture that doing so was wrong. This does not mean that, while waiting for his return, we can’t continue our lives and be busy doing normal everyday things. The problem arose after they were awakened.

“But at midnight there was a shout, ‘Look! Here is the bridegroom! Come out to meet him.’ Then all those bridesmaids got up and trimmed their lamps. The foolish said to the wise, ‘Give us some of your oil, for our lamps are going out.’ But the wise replied, ‘No! there will not be enough for you and for us; you had better go to the dealers and buy some for yourselves’,” (Matthew 25:6-9). 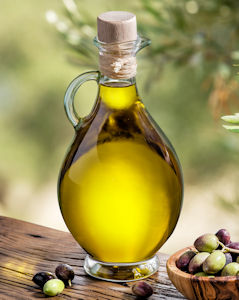 Upon waking, five of the young women — the wise ones — had not lost their focus on expecting the Lord’s return, nor were they disappointed that he was later than expected. Through faith they were ready with extra oil. But the foolish ones, had lost faith and lacked such oil that provided the needed light to follow the bridegroom.

One thought is that our Lord believes that at least half of the church will make it to the wedding. It may seem to some readers that refusing to share the oil was a selfish act, but no human can dispense the Holy Spirit to another human. It must be obtained from the spiritual realm.7

Going to the dealers to buy more oil is symbolic, too. You can’t literally buy the Holy Spirit, nor can you buy salvation with money (although some church leaders try to imply that you can). You can, however, ‘purchase’ or obtain it by living by the teachings of Jesus and developing a close relationship with him over time. It is needless to say that it was too late for the foolish virgins; time for complete conversion was gone.

“And while they went to buy it, the bridegroom came, and those who were ready went with him into the wedding banquet; and the door was shut. Later the other bridesmaids came also, saying, ‘Lord, lord, open to us.’ But he replied, ‘Truly I tell you, I do not know you.’ Keep awake therefore, for you know neither the day nor the hour,” (Matthew 25: 10-13).

While the foolish maidens were attempting to seek what they needed, the wise ladies followed the bridegroom and went to the wedding and supper. When the scripture says “later the other bridesmaids came,” it describes a period of time before the bridesmaids returned, and by then, it was too late. The door was already closed to their attendance. “I do not know you,” Jesus replied. He adds, “Keep awake therefore, for you know neither the day nor the hour.”

Although the above indicates my own explanation of the parable of the ten virgins in Matthew, be aware that there are other authors that have varying opinions. Some say that the oil is not the Holy Spirit, but Mercy. One author said, “I would propose that in the first layer or immediate application of Jesus’ parable to his Jewish listeners and Matthew’s readers, the oil he mentions . . . signifies ‘mercy’. . . .”8

He mentioned that according to Lazar Puhalo,9 “olive trees were actually named after mercy because the trees gave oil so abundantly and for so many goods that oil actually became an item of currency. The olive groves of the Palestinian region were and are glorious sources of provision, reflecting and symbolizing the generosity of God’s enduring and abundant mercy.”10 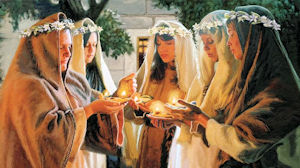 Four hundred years ago, an English author and minister, Matthew Henry,11 published a six-volume commentary set of the Bible that is still used today. His suggestion is that the oil is ‘grace’.12 Another author suggests that the vessel or flask for the extra oil implies the soul as stated in the Psalms: “I have become like a broken vessel,” (Psalm 31:12).13

Some think the foolish virgins are the nonbelievers in Christ, but I don’t think so. To me, they seem to just be those lacking the full set of Christian qualities. Others think it is all about the Bride of Christ. For those that believe so, you may be interested in an article titled “Who is the Bride of Christ?” which is listed in References & Notes.14

Then again, today many believe this parable is all about the rapture and Jesus shuts the door to those not worthy of being raptured to heaven. But I think the great wise majority of the Church will enter the Kingdom of God here on earth to help restore this planet to its former glory as it was in the Garden of Eden before sin entered into the world. You may not agree, but that is okay; I believe the full truth will be evident (one way or the other) sooner rather than later. If I am wrong, I will be happy to admit my error.

Lessons We Can Learn

The moral of this story is very clear — Christ’s second coming is a fact, so be ready. “As Christians, we profess, not only to believe and look for, but to love and long for the appearing of Christ and to act in our whole conversation with a regard to it. The second coming of Christ is the center in which all the lines of our religion meet, and to which the whole of the divine life has a constant reference and tendency.” Have your light ready to attend him when he arrives. “Christians are children of light. The gospel is light, and they who receive it must not only be enlightened by it themselves, but must shine as lights, must hold it forth.”15

Those foolish maidens did not have the proper Christian character to endure during the end times. So, those lacking the proper Christian attributes will feel much as those people in Noah’s time did, when the door to the ark was sealed shut and they faced the reality of being destroyed in the flood. 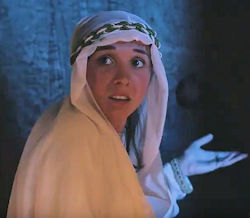 The lesson learned is if you are faithful and prepared for Christ’s return, you will make it to the wedding; if you aren’t, you won’t. Be ready to ‘shift gears’, so to speak, upon perceiving his return. When our Lord said “keep awake” he meant to be vigilant or aware.16

“The Parables of Jesus Christ: The Ten Virgins” is the selected video relative to this article. It is from LUMO Project, which is dedicated to recording the four Gospels as feature films using only the Bible as the script. This motion picture clip (about two minutes long) depicts the parable of Matthew 25. See listing in References & Notes for the link.17