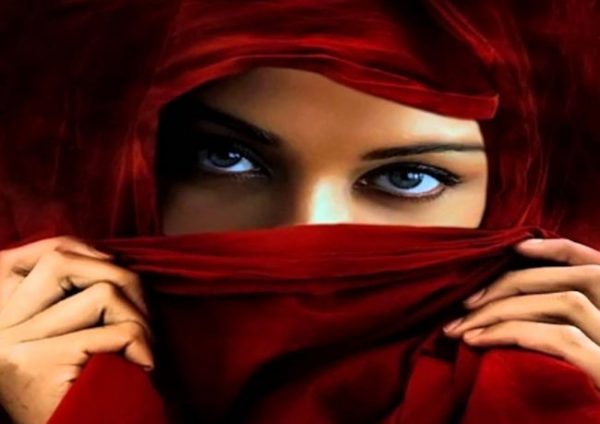 Chances are that most people have not read or heard about the story in Ezekiel, chapter 23. This is one of those “X-rated” chapters of the Bible, which may be occasionally referred to, but never read in church. It is a dire but foretelling story showing that God has a great deal of patience and will give you many chances, but sooner or later, without any repentance, he will eventually remove his protection and let you suffer the consequences of your actions.

Ezekiel was one of several prophets sent by God to bring the Hebrews to their senses, as they continually failed to follow his rules. Ezekiel 23, is our study and you should read all 49 verses for the thought-provoking and gory details. It is filled with vivid imagery of both sexual and violent natures.

Who were these sisters?

Although there is harsh language, the story is allegorical and symbolizes the division of the Israelites into northern and southern kingdoms (also known as houses)1 and expresses God’s intense anger at their disregard for his laws. “From the divine viewpoint, the division was a judgment on not keeping God’s commands, specifically the commands prohibiting idolatry. From a human viewpoint, the division was the result of tribal discord and political unrest.”2 To illustrate their unfaithfulness, they are compared to two promiscuous sisters: Oholah and Oholibah. 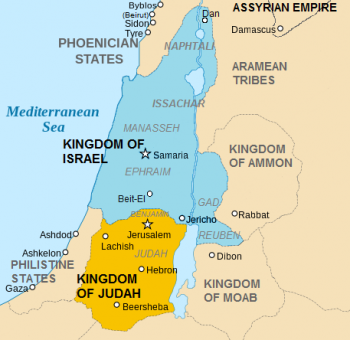 The story starts off with the prophet Ezekiel explaining a message he received: “The word of the LORD came to me: ‘Mortal, there were two women, the daughters of one mother; they played the whore in Egypt; they played the whore in their youth; their breasts were caressed there, and their virgin bosoms were fondled. Oholah was the name of the elder and Oholibah the name of her sister. They became mine, and they bore sons and daughters,’” (Ezekiel 23:1-4a, NRSV).3

“Whether or not ‘tent’ has anything to do with the tent as sanctuary is not clear.”4 And if there is any other significant meaning of the sisters’ similar names, the reason has been long lost, although that doesn’t keep some commentators from making some wild assumptions.

As indicated by the above scripture, our LORD pictures the cities of Samaria and Jerusalem as harlots who have abandoned their husband (God) and prostituted themselves to others. As we will see, what started as just trysts in their youth later turns into tragedy.5 Their prostitution offense was for both sexual and spiritual infidelity.

One sister was most wicked. 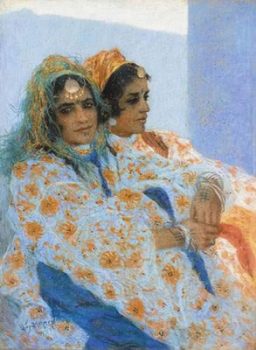 Oholah is accused of adultery with Assyrian soldiers and the worship of their pagan deities and making sacrifices to them. The Hebrew prophets frequently compared the sin of idolatry to the sin of adultery.6 Such choice metaphors were highly appropriate because God’s people were quite literally prostituting themselves by involvement with gods whose priests and priestesses offered sacramental sex to all.7 So, God punishes her for her lust by giving her over to Assyrian control—they strip her naked, take her children, and kill her (Ezekiel 23:5-10).

Now her sister, Oholibah, was even more corrupt and couldn’t seem to keep her attentions away from any man in uniform; she viewed the enticing carvings on the walls and buildings of the city with lust in her heart. She disregards her sister’s tragedy and continues her whoring with the Assyrians and, worse yet, with the Babylonians, as well. God abandons her in disgust, but she continues her whoring (Ezekiel 23:11-21). Finally, God proclaims that he will send soldiers to conquer and disfigure her, taking her children, and burning her people (Ezekiel 23:22-35).8

So much was the disgust of Oholibah that God spoke saying, “she increased her whorings, remembering the days of her youth, when she played the whore in the land of Egypt and lusted after her paramours there, whose members were like those of donkeys, and whose emission was like that of stallions. Thus you longed for the lewdness of your youth, when the Egyptians fondled your bosom and caressed your young breasts,” (Ezekiel 23:19-21).

“Members,” as used above, are a euphemism for penises.9 Concerning the seminal10 emission or ejaculating imagery, it is noteworthy to mention that the horse was the hieroglyph that Egyptians used for a lustful person.11 Verse 20, in the Complete Jewish Bible, states, “Yes, she lusted after their male prostitutes, whose members [genitals] are like those of donkeys and who ejaculate like stallions,” (Ezekiel 23:20, CJB).12 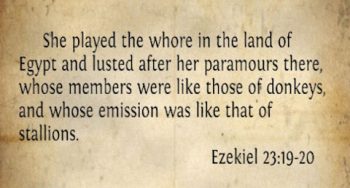 God predicts what will happen. The Babylonians and Chaldeans, as inflicters of judgements, would come against Oholibab and the punishment is described as brutally severe. “They shall cut off your nose and your ears, and your survivors shall fall by the sword. They shall seize your sons and your daughters, and your survivors shall be devoured by fire. They shall also strip you of your clothes and take away your fine jewels,” (Ezekiel 23:25-26). “How just the retribution, that the features most bejewelled should be mutilated!”13

God then orders Ezekiel to announce this judgment to Oholibah, and accuses the Judahites of committing adultery by worshiping idols and practicing child sacrifice, polluting the temple and desecrating the Sabbath by simultaneously worshiping the God of Israel and idols of other gods, too. God compares this to prostitution and calls for their punishment (Ezekiel 23:36-49).14

There is a little known song about Oholah and Oholibah by an American rock group ‘Gordon Gano and the Ryans.’ A link to an audio recording of the song is included in the References & Notes at the end of this article.16 A selection from the lyrics follows. 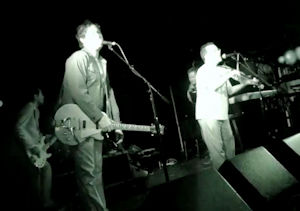 “The lesson of the sad story of Oholah and Oholibah is that God is a jealous God who punishes those who turn their backs on Him and chase after idols. Though God is patient and long-suffering, eventually His judgment falls on the unfaithful. We reap what we sow.”17 “Do not be deceived; God is not mocked, for you reap whatever you sow. If you sow to your own flesh, you will reap corruption from the flesh; but if you sow to the Spirit, you will reap eternal life from the Spirit,” (Galatians 6:7-8). 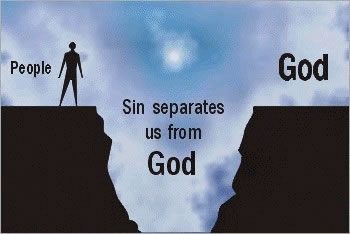 I live in the United States and I know a great many of its people, including those in government, have forsaken God. Even many who continue to go to church are Christians in name only. They attend services on Sunday, but are blinded by the evil god of this world—the devil—during the rest of the week.

The increase in evil is very evident when laws are passed to protect depraved practices and people are encouraged by satanic forces to accept immorality and iniquity into the culture: homosexuality, transgenderism, pornography, pedophilia, breaking up the family unit, abortion, racial and political division, drugs. And what about the creation and worship of other gods, such as individuals in the movie, television, music, and sports industries? I’m sure you can think of many more. Our world is headed into darkness—our moral structure is being torn apart.

As I said in the beginning of this article, God has a great deal of patience and will give his people many chances, but sooner or later, without evidence of any repentance, he will eventually remove his protection and all involved will suffer the consequences of their actions. I’m afraid he will do this to the United States, and probably many other nations, too. His actions will be justified when he does. Let us pray for our nations to return to God before it is too late.

I should now add that there is good news, too. God does indicate, later in the book of Ezekiel, a vision for a restoration in a future new world, where the tribes of Israel can live once again. Our LORD, in his mercy, will always provide a chance for redemption, if chosen before time runs out.