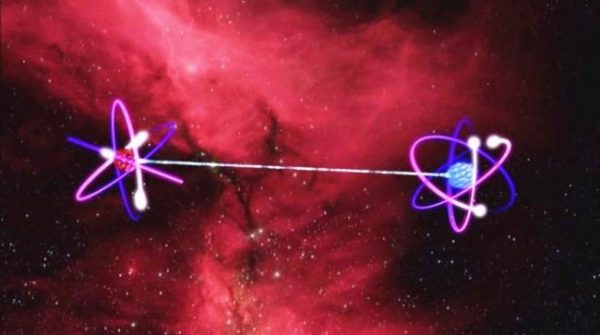 I do not believe that science is the enemy of faith, but that science and Christian doctrine can be accommodated together. So all through my life I studied science and feel what I’ve learned has given me a better and closer relationship with my heavenly Father. In a book titled Is God a Scientist? it states: “In the past scientists have said that God has two books, one of scripture and one of nature. If this is so, then religion and science should complement one another as Copernicus, Galileo and Newton believed.”1

Previously, I wrote an article about some amazing new discoveries in modern science that touched upon the awesome mechanics behind God’s creations, but the length was too long and the number of topics were too many. It is for this reason that I’ve taken the information from that long article and divided and revised it into shorter material. This article is part of a series I call “Science Reveals God’s Majesty.”

What is Quantum Entanglement?

In modern physics, there is very active research into two mind-bending and seemingly wacky discoveries known as ‘quantum entanglement’ and ‘non-locality.’ Now, when we talk about quantum entanglement, we are speaking of the invisible tiny particles that make up the parts of atoms; ‘quantum’ meaning the smallest amount possible. For example, a photon is a single quantum of light.2 The physicists that study these things work with particle accelerators (atom smashers).3

Scientists have found that quantum entanglement occurs when separated pairs or groups of these tiny quantum particles interact in ways that the properties of each particle or group cannot be described independently of the others. Although no force passes between them, they are connected and act as one. As an example, if something is done to one particle, its entangled counterpart also reacts; this happens without any touching and they act as one unit.

When the entangled particles are separated by distance, the interaction continues and this fact, known as ‘non-locality,’ is a phenomenon that Einstein called “spooky action at a distance.” If you tamper with one particle of an entangled pair, the other particle perceives that the action has been performed, even if separated by distance, and acts accordingly. The particles – or even groups of particles – react instantly and in unison, to any events without regard to distance or the limits imposed by the speed of light. In such a case, the groups of particles are not each individual, but a single undivided whole. In other words, two or more particles, be they protons, electrons, atoms, or molecules, could be entangled whereas one will affect the others instantaneously, even if at very great distances of separation.4 This effect has already been demonstrated across hundreds of miles, but believed to be true across distances measured in light years.

An even stranger discovery, in connection with this research, is that “a particle’s behavior changes depending on whether there is an observer or not. It basically suggests that reality is a kind of illusion and exists only when we are looking at it. Some particles, such as photons or electrons, can behave both as particles and as waves.”5 That is, sort of, if someone isn’t looking at it, it’s not there. As physicist Niels Bohr6 said, “if quantum mechanics hasn’t profoundly shocked you, you haven’t understood it yet.”

Dr. Dean Radin, researcher, author, and previous senior scientist at the Institute of Noetic Sciences, wrote: “Physicists have even speculated that entanglement extends to everything in the universe, because as far as we know, all energy and all matter emerged out of a single, primordial Big Bang. And thus everything came out of the chute already entangled. Such proposals suggest that despite everyday appearances, we might be living within a holistic, deeply interconnected reality.”7

What Does This Have to Do With the Bible? 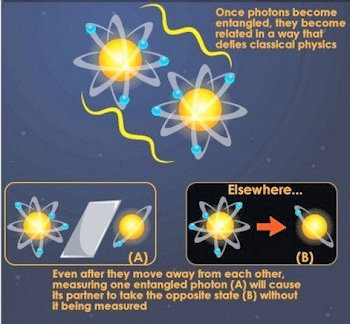 Now, you may ask, how does all this scientific stuff about the new physics relate to the Bible? Well, a radio interview of physicist Dr. Michio Kaku, by Deepak Chopra, should get your attention of how this may relate. Chopra “commented on this non-local phenomenon, saying, ‘You know, the more I hear about quantum entanglement, it sounds like a mathematical description of omniscience, omnipresence, [and] omnipotence.’ Dr. Kaku responded, ‘That’s what it leads to. Their theory says that I exist because you look at me, somebody looks at you so you exist, so who looks at her? Who looks at us? Well, God.’ Mind before matter is the correct order of the equation to creation, not the other way around. Matter is nothing less than an expression of divine intelligence giving it the command: ‘Make it so.’”8

That is a similar thought of what was written on a bumper-sticker I once had on my pick-up truck, many years ago, which read: “Big Bang Theory: God said it, and BANG, it happened.”

This science is in its infancy, but scientists are already considering future use for this new knowledge in computers, communications, cryptography and, possibly, teleportation. Some exotic quantum computers are actually now being built; research is moving at a fast pace, just as predicted in the book of Daniel. “But you, Daniel, keep this prophecy a secret; seal up the book until the time of the end, when many will rush here and there, and knowledge will increase” (Daniel 12:4, NLT).

Who knows what other uses will be found in the years ahead. But, for now, just contemplating this solid scientific research adds expanded thought and understanding to the creation story in the book of Genesis—as an example: “Then God said, ‘Let there be light,’ and there was light” (Genesis 1:3, NLT).

Although many Christians believe science has nothing to do with faith, learning the science behind God’s creation can help us understand him as well as his purpose. So my advice is continue to read scripture, of course, but don’t be afraid to keep up with scientific knowledge, for you can be learning about God’s physical universe, as well as his spiritual one.

Your email address will NOT be published. OBS respects your privacy and is compliant with the European Union GDPR regulation.