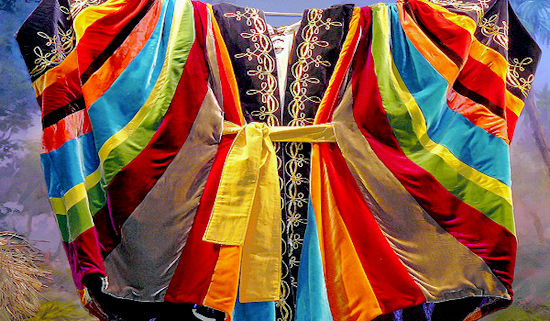 Joseph, whose descendants became one of the twelve tribes of Israel, was the son of Jacob (whose name was changed to Israel) and his wife Rachel. As a teenager, he was sold into Egyptian slavery by his brothers, but God watched over him and he rose to become the second most powerful man in Egypt. While his story is heroic and filled with drama, it also demonstrates principles of redemption and forgiveness, and shows that God protects the righteous, even when those around them cause trouble. There is much to study about Joseph’s life, but this particular article concerns only one small part of his youth, at the start of his journey down a very unusual life path. This story begins in Genesis, chapter 37, and it took place about 1500 BC.1

Possibly the most remembered piece of clothing mentioned in the Bible is what Israel (Jacob) gave to his son, Joseph — the extraordinary ‘coat of many colors’. That term is from the King James Version of the Bible, but near enough is the same verse from a modern version. “Now Israel loved Joseph more than any other of his sons, because he was the son of his old age. And he made him a robe of many colors” (Genesis 37:3, ESV).2

Although Israel had children by two wives and two concubines,3 his favorite spouse was Rachel and her firstborn was Joseph, who was born when Israel was about 74 years old.4 This made Israel a very happy man, for he finally received a son from the real love of his life, the only woman he had intended to marry, and so, understandably, Joseph was his favorite son. 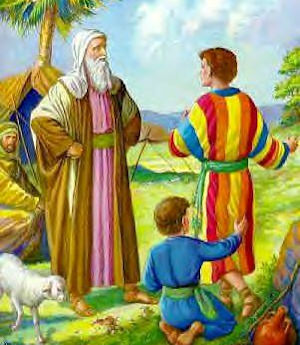 Our story begins when Joseph was seventeen years old and was attending to the animal flock with his older brothers. Israel probably was teaching Joseph leadership skills and placed him in a position of authority (a supervisor), as it mentions that Joseph gave a bad report of his brothers to his father (Genesis 37:2c). This action does indicate Joseph had his father’s interests in mind. But, nobody wants to be snitched upon, besides, it was probably obvious that the father valued Joseph more than the other boys, so all the brothers were jealous of Joseph.

To make matters worse, Israel presented his favorite son with a special garment, a beautiful coat or robe. The special design or colors likely distinguished Joseph as Israel’s chosen successor for clan leadership.5 A coat of many colors would have been quite rare, because expensive dyed textiles were generally reserved for special garments and occasions,6 a good reason why most people wore such drab earthy shades at that time. This type of special treatment probably caused the brothers’ jealously to escalate.

While most educators describe this piece of clothing as having many colors, there is some academic argument about it. The Hebrew phrase for ‘coat of many colors’ is also used in 2 Samuel for a ‘long robe with sleeves’ (2 Samuel 13:18), where it is implied in the context of royalty, for it was how the virgin daughters of the king dressed. In addition, one ancient Greek translation (by Aquila of Sinope) says the garment was ‘down to the ankles’, and still others translate it as ‘a tunic with long sleeves’.7

Therefore, today many common Bible versions give different interpretations. About the only thing translators can actually agree upon, is that the robe wasn’t common, that it was embellished in some fashion, and not something suitable to wear for working. A few of these differing translations are: a beautiful robe (NLT); an ornate robe (NIV); a special tunic (NET); a tunic of many colors (NKJV); an elaborately embroidered coat (TM).8

The brothers’ jealousy turned to hatred and they sold Joseph into slavery.

Then Joseph had two related dreams, both indicating that he would one day be in a leadership position, possibly even over his own family. Dreams were considered a common means of divine communication in the Old Testament (as well as today), and particular dreams, like Joseph’s, were believed to be prophetic.9 He probably wasn’t arrogant or conceited about the prospect of leadership, only excited that he had dreams from God as his father once had. 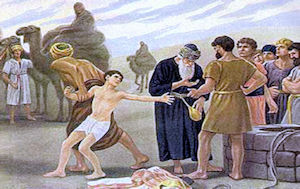 He blabbed about these dreams to his brothers which, unintentionally, caused his siblings to believe Jacob wished everyone bow down and praise him. Joseph even told his father, who rebuked him, thinking Joseph wished the same devotion from his parents. But later his father began to meditate on possible real reasons for the dreams.

Later, when his brothers had moved the flock to pasture in another area, Israel sent Joseph to see how the flock was doing and report back his findings. As Joseph approached, his brothers spotted him coming and they conspired to kill him. As one commentator wrote, “their smoldering anger finally boils over into violence.”10

The oldest boy, however, keeps the other brothers from committing murder, so they decide to strip Joseph of his clothes and throw him into a deep pit. After this deed, because their hearts were cold, they shamelessly sat down to eat a meal. They noticed a caravan of traders heading for Egypt and sold their brother to them. When these traders arrived in Egypt, Joseph was then resold to a military officer of the Pharaoh.

Meanwhile, the brothers took Joseph’s costly robe and stained it with goats’ blood. Upon returning home they show it to their father, who is heartbroken by his sons’ deception that indicated Joseph was dead. Israel tore his clothes, put on sackcloth, and mourned for his son. Tearing of clothes and wearing sackcloth were traditional customs for expressing grief.11

As mentioned earlier, there is much more to the saga of Joseph’s life and it is all recommended for reading and study. This whole story of Joseph is symbolically an example of Jesus Christ. Joseph was a good and faithful man, he loved his father and obeyed him, he rebuked the sin of his brothers and was hated for it. He was sold into the hands of enemies, punished unjustly, and (in later chapters) was exalted to become the savior of the people.12

Joseph’s coat of many colors has given rise to references in popular modern culture. Most popular are Andrew Lloyd Webber’s music (and Tim Rice’s lyrics) for the theatrical performance Joseph and the Amazing Technicolor Dreamcoat of 1972, and a motion picture by that name starring Donny Osmond in 1999. And there is a novel, titled The Red Tent, by Anita Diamant, published in 1997, which mentions the colorful garment in a story about Joseph’s sister, Dinah.13

But for my music selection for this article, I chose the song “Coat of Many Colors.” This song about being bullied for being poor when she was young, was written by Dolly Parton, but is performed in the video by husband and wife country/bluegrass singers Rory and Joey Feek. (Joey died in 2016; she had cancer.14) This is a recording from “The Joey & Rory Show” on radio station WSM in Nashville, Tennessee (USA) in 2014. Selected lyrics are below and the music video link is listed in References & Notes.15 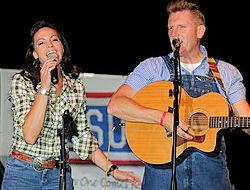 There were rags of many colors, and every piece was small
And I didn’t have a coat and it was way down in the fall
Mamma sewed the rags together, sewing ever piece with love
She made my coat of many colors, that I was so proud of

As she sewed she told the story, from the Bible she had read
About a coat of many colors Joseph wore, and then she said
Perhaps this coat will bring you, much love and happiness
And I just couldn’t wait to wear it, and Mamma blessed it with a kiss