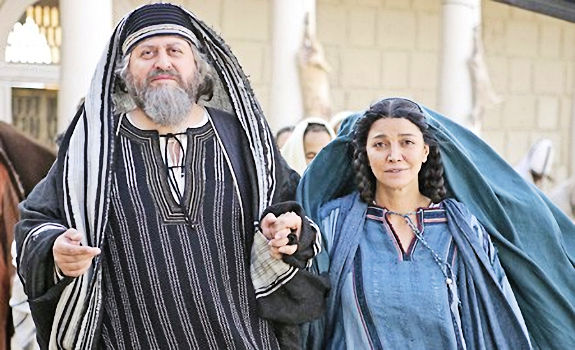 Elizabeth was the mother of John the Baptist and a descendant of Aaron, the prophet, high priest, and elder brother of Moses (Exodus 6:23-25). Her name means ‘my God has sworn’ or ‘God is my oath’ and she was a pious and privileged woman. She married Zechariah, of the priestly order of Abijah1 (or Abia), who ministered in the Temple. Priests were allowed to marry, although there were some restrictions (1 Chronicles 24:10).

Elizabeth and Zechariah were righteous before God by keeping all the commandments, yet there are but five words in the Bible that focus on their heartbreak and disappointment: “And they had no children,” (Luke 1:7a).2 Although they prayed and longed for a child during their long marriage, the prospect of childbearing was long past. This put Elizabeth in a humiliating position, for it was the dream of every woman, of her and her husband’s ancestry, that she may have “the privilege to be the mother of the Messiah promised to Eve, earth’s first mother.”3 Her amazing story can be found in the first chapter of the book of Luke (verses 5 – 80).

Like few others before her, God performed a miracle and she conceived a son in her old age. While performing his priestly duties, an angel (assumed to be Gabriel) appeared to Zechariah and said, “your prayer has been heard. Your wife Elizabeth will bear you a son, and you will name him John. You will have joy and gladness, and many will rejoice at this birth, for he will be great in the sight of the Lord,” (Luke 1:13b-15a). 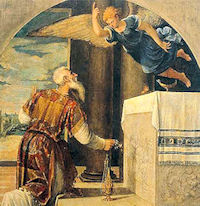 Then the angel instructed him, “He must never drink wine or strong drink; even before his birth he will be filled with the Holy Spirit. He will turn many of the people of Israel to the Lord their God. With the spirit and power of Elijah [see the prophecy in Malachi 4:6] he will go before him [the Lord Jesus], to turn the hearts of parents to their children and the disobedient to the wisdom of the righteous, to make ready a people prepared for the Lord,” (Luke 1:15b-17). Surely Zechariah, although mute, found a way to communicate every little detail of this encounter to Elizabeth.

As a side note, there is an article on Elijah (and Enoch) who most people believe were whisked away to heaven by God, because the Bible doesn’t mention their death. The article is titled “Enoch and Elijah: Are they Dead or in Heaven?” and it is listed in References & Notes.4

Fast forward several months, when an angel (stated to be Gabriel) visited a virgin named Mary in Nazareth, who was also a cousin of Elizabeth. Gabriel told Mary all that would happen to her and also explained, “And now, your relative Elizabeth in her old age has also conceived a son; and this is the sixth month for her who was said to be barren. For nothing will be impossible with God.” Then Mary said, ‘Here am I, the servant of the Lord; let it be with me according to your word.’ Then the angel departed from her,” (Luke 1:36-38).

Mary was not only startled, but confused as how she was going to publically confront her situation, being a virgin as she was. So, as one Christian minister speculated in her sermon, Mary, in trying to handle the fear she had, “desperately craved an older woman to give her some perspective,” so she decided to visit her cousin Elizabeth.5 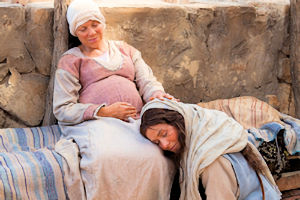 She traveled to the home of Elizabeth, who lived some distance away in the mountains of Hebron, and upon arriving and greeting each other, Elizabeth’s baby “leaped in her womb” (Luke 1:41b). Elizabeth was filled with the Holy Spirit and exclaimed to Mary, “Blessed are you among women, and blessed is the fruit of your womb,” (Luke 1:42b).

It is interesting to note that this verse citing Elizabeth’s exclamation has formed the second part of the Hail Mary (Latin: Ave Maria) prayer that some Christian religions use. Catholics use this prayer in praying the rosary.6 “Hail, Mary, full of grace, the Lord is with thee. Blessed art thou amongst women and blessed is the fruit of thy womb, Jesus.”

And Mary’s song of praise (Luke 1:46-55) is a beautiful balance expressing humble recognition of greatness and the holy nature of God and his grace, with an awareness that God’s unique calling on her life, would result in all future generations calling her blessed. “She viewed herself as both humbled and exalted.”7 I am sure Elizabeth had similar feelings.

Can you imagine these two women, sitting and talking, and trying to fathom that the Messianic hopes over the centuries were about to be fulfilled between them — a prophet like Elijah and the promised Savior of the world? They saw the spiritually entwined relationship of their unborn children — John was to be a prophet like Elijah birthed by Elizabeth, and Jesus was to be a king like David birthed by Mary.8 (David was an ancestor through Jesus’ stepfather, Joseph.) The bond between them must have been phenomenal, but after three months, Mary, growing in size, had to return home. 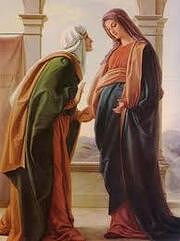 Concerning this relationship between Elizabeth and Mary, one coauthored article called their friendship one of their favorites in the Bible. They wrote, “Friendships between women are complex, but they’re worth figuring out because we need one another. Sometimes a girlfriend is the only one who truly understands us.”9

There are three articles on this site for those interested in Mary’s story of pregnancy and the birth of Jesus. The titles are: (1) “Mary & Joseph — Mother & Foster-Father of Jesus”, (2) “Jesus’ Mother was a Virgin — What? Is That Even Possible?” and (3) “Puzzle Solved: Here is Jesus’ Birth Date, and the Date of Mary’s Conception, too.” See the links in References & Notes.10

From the Bible’s commentary and other sources, we know that John and Jesus were related, but the New Testament does not record them being together before John baptized our Lord. John had an exotic and radical personality and was probably a member of the private community of Essenes. They were extremists and cult-like and lived an abstinent lifestyle.11

It is obvious Jesus had respect for John and seemed to know that John was the voice foretold in Isaiah. “A voice cries out: ‘In the wilderness prepare the way of the LORD, make straight in the desert a highway for our God’,” (Isaiah 40:3). “Isaiah saw a general picture of someone making preparation for the Lord’s coming,” and the writers of the New Testament Gospels “connect these words with the ministry of John the Baptist” (see Matthew 3:3, Mark 1:3, Luke 3:4).12

Luke 1:56–64 is the last time Elizabeth is mentioned in the Bible. Since not much else is in the biblical record about Elizabeth, it is probably because of her advanced age, she may have died years before her son was cruelly murdered by Herod. 13 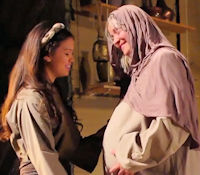 Being unable to find appropriate music, I found a short movie clip that was suitable. The short scene (less than 3 minutes) is about the visitation of Mary to Elizabeth’s home. It opens with a humorous event of the mute Zachariah working inside the house, just before Mary arrives. (Why mute? Read his story at Luke 1:8-20.)

This scene is taken from a motion picture directed by Ryan Stafford of Victory Productions. It was difficult to find anything about this movie on the internet. I’m not even sure if the title is Believe, as indicated by the person who uploaded it to YouTube. If anyone has additional information, please send it so I can update this article and give proper credit and copyright notice. Link to the movie clip is in References & Notes.14

4 thoughts on “Elizabeth — Mother of John the Baptist”