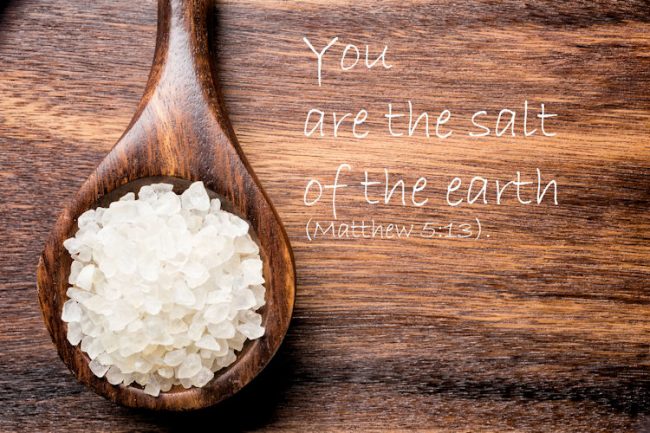 Chapter 5 of the book of Matthew starts off with Jesus listing the Beatitudes, given in the Sermon on the Mount. These items are the characteristics of true believers. Immediately following these blessings, Jesus gives what is called the Similitudes about salt and light, which describe the functions of our Christian character.

This study will be only about the salt: “You are the salt of the earth; but if salt has lost its taste, how can its saltiness be restored? It is no longer good for anything, but is thrown out and trampled under foot,” (Matthew 5:13, NRSV). What does this mean?

Most people think of table salt when reading this verse. Commentator Andrew Knowles likens the flavor and preservative qualities of the substance to Christians promoting goodness to society.1 Author Joseph Exell suggests that, like salt saving the flavor of food, Christians are the saviors of others.2 Writer Leonard Greenspoon said when “Jesus spoke of his audience as ‘the salt of the earth,’ he was obviously paying them a high compliment. Salt preserves; it also adds taste and flavor. Even today, being called ‘the salt of the earth’ is frequently a good thing.”3 But to get the real understanding, we must examine salt from the perspective of people at that time.

More than just a flavor enhancer?

“You may be interested to know that the first reference to salt in literature is in the Scriptures.”4 In Job 6 it states, “Don’t people complain about unsalted food? Does anyone want the tasteless white of an egg? My appetite disappears when I look at it; I gag at the thought of eating it!” (Job 6:6, NLT).

Salt was once scarce and precious and even related to money5 and legal matters.6 Ceasar’s soldiers received part of their earnings as a salt allowance. The Latin word salarium, from which the word salary was derived, originally was ‘salt money’ and indicated the sum paid to soldiers for salt.7 The biblical phrase ‘covenant of salt’ indicated a two-way agreement, “the inviolability of which was symbolized by salt (e.g., between God and Aaron, Numbers 18:19).8 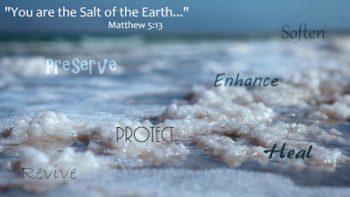 This ‘covenant of salt’ custom of pledging friendship or compact is still retained among some Arab people. An interesting story about explorer Charles Doughty was that in his Arabian travels, the salt covenant saved his life a couple of times. “Once an Arab has received in his tent even his worst enemy and has eaten salt (food) with him, he is bound to protect his guest as long as he remains.”9

Refined salt had other uses besides being an additive to food; it was used as an antiseptic in medicine. “Newborn babes were bathed and salted (Ezekiel 16:4), a custom still prevailing.”10 Another custom, this one a Catholic liturgical baptismal ritual tradition, included “putting salt on the infant’s tongue, as a symbol of incorruptibility.”11

Now, those are uses for refined salt, today’s common table salt, or at least the somewhat purified salt available several thousand years ago. The possibility of salt losing its flavor seems debatable, since sodium chloride (NaCl – table salt) is a stable compound and can’t lose its flavor, so why would Jesus make such a statement? “You are the salt of the earth; but if salt has lost its taste, how can its saltiness be restored?” (Matthew 5:13a, NRSV).

The best explanation “is that what would have been called salt of that era was quite impure, containing a wide array of other compounds” besides sodium chloride. And since the more pure the salt, the higher the price, most ancient people used salt of a lesser quality. “The salts in Jesus’ day were mixtures of chlorides of sodium, magnesium, and potassium [all called salts by chemists], with small amounts of calcium sulfate (gypsum). Some of these would dissolve more quickly than others, while some were better able to withstand the [environmental] elements.

“These hardier . . . salts were generally more valuable in an agricultural context because that meant their benefits would last longer.”12 So, during any times of high moisture, rain, or flooding, the sodium chloride salt, being the most soluble in water, would dissolve and wash away, leaving a white powder looking just like salt, but not having any flavor or preservative properties.13 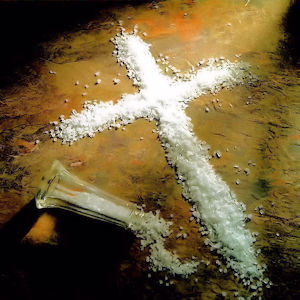 While too much modern refined salt will produce sterility and barrenness in the ground,14 most ancient salt samples didn’t have enough sodium chloride to be dangerous and, because of the other salt compounds, could even be useful as fertilizer to improve the soil.

Author Anthony Bradley wrote about an article he read in Biblical Archaeology Review where the writer15 “argued that in Matthew 5:13, Mark 9:50, and Luke 14:34–35, Jesus was speaking not primarily of salt’s household use but of its agricultural use.” According to the writer, “several kinds of salt are found in Palestine that are different from the kind we’re familiar with. There is rock salt, salt evaporated from Dead Sea water, salt pits (Zephaniah 2:9), and more.” Additionally there are many references in agricultural literature to the use of various salt compounds as a fertilizer. He noted that “the value of salt in small quantities appears to have been known in ancient times; many sources record its power to improving herbage of pastures.16 Although various kinds of chemical compounds are necessary for the soil to be fruitful, soil that is nothing but sulfur and sodium chloride salt is a desert wasteland (Psalm 107:34).17

So, changing our perspective about salt can change our perspective about what Jesus said. He may have been implying that his disciples were like the salt that made soil more fertile in an agricultural sense. He was warning them that they should not lose their ability to bring about life and growth and change. The “salt of the earth” could very well be “salt for the earth” or “salt for the soil.” If we lose our saltiness, we are of no further value in spreading the good news. It is evident that Christians are not here just to merely season or preserve the world from decay, but to stimulate growth in parts of the world that are barren—to encourage this Christian life and make sure it grows and spreads.18

4 thoughts on “Can the Salt of the Earth Lose Its Flavor?”